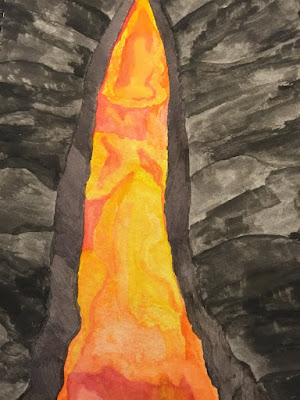 It seemed like she'd left the cool, perfect waters so long ago it was difficult to imagine that she'd only been moving for a day.  The climb that followed the emergence from the lake was brutal and tested her resolve with every step.  There were slips and cuts as her feet slid from the missteps or her hands fumbled the grab and it occurred to her that she was fighting with more than just the terrain.

Before long the texture of the rock changed: it was softer, sandier and her hands turned black as she pushed herself up.  As she rose the temperature of the air seemed to rise with her and soon there was steam and the scent of smoke in her nostrils.  Her body began to sweat and the salty liquid felt rejuvenating somehow- like things she really needed out of her body were making their exit through her pores.

She pushed onward, not knowing what was coming next but not daring to indulge those thoughts nipping at the edge of her consciousness.  She focused on the movement and the strength in her muscles.  She kept her mind occupied with the sensory input of a world so strange and yet somehow so familiar to experiences she'd had inside of her own body.

Before long she came out of the caverns and a field of black lay before her.  Setting eyes on it she now understood the heat and the steam and the faint scent of sulfur.  Her feet seemed to bounce on the soft black surface made from years and years of dried and hardened lava flow.  In the distance she could see the mountains she was promised when she set out and the sight drove her forward across the alien expanse.  Steam vents erupted around her and her feet ached from the long climb but she kept on, willing herself to stay true to her cause.

Until she came to the river.  Not one of water, but of fire.  A deep slit in the ground and a flow of magma stretched across her entire path.  It was here that the fear she'd kept at bay through movement finally erupted in full force and claimed her, pushing her back and finally laying her flat on the ground.  She lay there, panting and despairing, and let herself feel the emotion in all its horror.

But that voice which had been with her from the beginning, the one growing in volume with each step she took on her journey, came back again.  "Just look around," it said.  A calm, practical step to take in the midst of such confusion and terror.

She pushed off her pack and looked around- scanning first the edges of the rock, and then further in each direction.  There must be a bridge of hardened magma somewhere, or some narrowing of the gap where she could safely step across.  But as far as she could see there was nothing: no bridge to cross, no safe passage, no break to the unrelenting flow of molten heat.

As panic began to seize her very cells she started running in desperate hope of the view changing- surely it couldn't go on like this forever?  But her legs gave out long before the perpetually retreating end ever came.  She collapsed again, this time for good.

And in her hopeless, defeated state she couldn't fight it any longer- her shadow emerged in all its savage, merciless power.

"What were you thinking?  Of course you can't do this- what an idiot you must have been to even attempt it.  Now you'll have to go all the way back and tell the story of your failure to everyone who asks.  You defective ruin, you weak fool, you useless waste of life..."

She surrendered to it, as the waters had taught her to.  And as she lay there breathing, baking in the heat from the harsh river near foot and not fighting something changed.  That voice, so full of mighty, unyielding power, seemed to fade.  Without her pushing back the dam broke and the hatred flowed out of her.  It seemed to her that she could almost feel it hit the burning surface of the river and join its flow- on to wherever it may lead.

And in the aftermath of such an extreme emptying, shaking and purified and finally free, she had a thought: what if I just jump?

She sat up slowly and took a breath.  The heat of the molten flow hit her in the face but she was no longer afraid of it.  It was made of the same material as she and she knew that without fear she could live in unison with that force, she could even use that power to fuel her.  She stood up and walked the long way back to her pack, watching the flowing light against the obsidian shore.  She mounted her pack onto her shoulders and noted how much lighter it seemed now, how much more easily she moved.

She gingerly crept to the edge and measured the gap in her mind.  Fear bubbled up again, a little trickle of alarm, and listed the facts: her legs were tired, she was exhausted, she might not make it across.  But she didn't argue, she just listened and watched.

And in that space she found her true voice again.  It told her that in order to grow she must leave what she knew behind.  In order to become she had to shed what she was.  "Just jump," it told her.