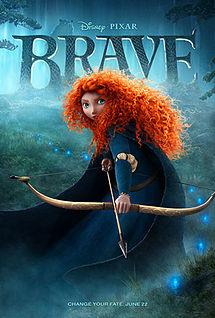 There seems to be a deep dichotomy between viewers of Pixar’s 2009 feature Up: those who loved it and those who hated it.  Being a member of the later camp my expectations for Brave were guarded at best.  I think it is because of this that I enjoyed it as much as I did.

This isn’t to say that Brave wasn’t good in it’s own right.  As an animated movie that is marketed to children it’s very enjoyable to an older audience.  It contains a lot of references to timeless fairy tales that I think today’s youth don’t get anymore.  And the overall theme is much more mature than the mindless drivel featured in other children’s films.  My disappointment is based on the fact that Pixar has set the bar so incredibly high with past films like WALL-E (my favorite), Monsters Inc. and the like that they now struggle to reach that bar.

First, here’s what’s good about Brave: it’s definitely catered to a more mature audience.  As an adult, I appreciated the vaguely Hans Christian Anderson feel of the fairy tale.  I understood the message about the complex relationship between mothers and daughters and it hit home on a very real level since I took my mom to see it.  Like all great dramas, the primary conflict is one caused and rectified by the main character herself- there’s no real bad guy in this so the story arc is more meaningful.  And on a simpler level, it’s about damned time that Pixar featured a female protagonist.

And Pixar does treat its first female with the respect she deserves.  Yes- she’s a great archer and she is, of course, brave.  But in the end what shines in her are the same traits that females throughout history have exemplified: her oratory abilities, the care she takes in keeping the family together and her ability to bring peace to the hot-headed men who might start a war without the calming influence of their wives and daughters.  (And her sewing skills prove pretty damned valuable, too!)  She’s a great heroine, not a great girl beating guys at their own macho games.  That's a vitally important distinction that I think other films (Mulan, anybody?) have missed.

Also, as a love song to Scottish culture it does ok.  I loved the Scottish brogues, the music, the kilts, the beautiful countryside, the Highland games, the tapestries (one of which serves as a main plot point), even the infamous haggis makes an appearance.  And will-o’-the-wisps have never looked cuter, I’m just waiting for those stuffed animals to pop up in the Disney store.

But here’s where Brave fails where WALL-E and others have succeeded: it’s forgettable.  It’s not that a robot experiencing human emotions and yearning to be loved was so radical, but the way that WALL-E brought it to life sticks with you in your soul.  And it’s not that a monster with a heart of gold is brand new (though I would argue the universe in which that monster lived certainly was); but Boo and Sulley made a permanent imprint on my heart.  (BTW, how excited was I to see a preview for the prequel featuring Mike and Sulley’s antics in college?!?  I will SO be seeing that!)  These movies made an impact on me that have lasted for years (maybe forever).

It’s the elusive Pixar magic that other companies have tried and failed to reproduce (though Illumination, the company that created Despicable Me, may be taking the helm on that) and Brave just doesn’t have it.  It was cute, it was whimsical and it had a good message for mature audiences (at least mature audiences who love their mothers but are driven crazy by them).  But it lacked the Pixar magic that made previous movies so amazing and at the end of the day that will confine it to a less stellar line-up of films.  However, to be fair let me conclude by saying this: if the worst thing you can say about a Pixar film is that it wasn't as mind-blowingly wonderful as WALL-E, that's not too bad.
Posted by Bevimus at Monday, July 30, 2012 3 comments:

“I told you this was gonna happen.”

“No, you said you had ‘a bad feeling about’ it or some other vaguely ominous sounding bullshit but you most certainly did not tell me that this was going to happen!”

“Yes, and you can see now how incredibly helpful that was.  I’m so freakin’ indebted to you.”

“I know what you’re saying and I’m telling you to shut the hell up!”

“Ok, ok, I’m sorry.  Sheesh.  Can’t even say ‘I told you so’ without getting your head bit off around here.”

The Battle of WoW

“Uh, want to take a look at your screen for a second?”

“Somewhere around the time that you started shouting smack-talk about balrogs- which they so weren’t.”

“I was casting my ass off and instead of protecting me like you were supposed to you went all berserker and left me to die!”

“Well, you shouldn’t be so… killable.”

“Totally ignoring the battle plan and doing whatever the hell you felt like, yeah- I noticed.”

“Yeah, well.  The least you can do is bury me so I don’t end up as one of the mindless undead.”

“Bury you?  No way, man!  Hell, you’re lucky I don’t skull-fuck your sorry ass into oblivion.”

“Woah- what the hell was that?”

“Dude, my controller’s vibrating out of my hands!”

“How the hell are you doing this?”

“Seriously?  So there’s like a whole other bunch of quests and stuff you do as a ghost?”

“You will, I’ve been sucking your health this whole time.”

Last night I did two activities that are both very, very good for me and both of which I haven’t done for a long, long time.  I’m not entirely sure what prompted me to suddenly pack my after-work schedule full of self-care activities but I do know that I felt so drastically better afterwards that it made me think about why it had been so long since I’d done these things.  The most immediate insight was simply that I haven’t been taking very good care of myself lately.

This led me to review my challenge for this year to see how it ties in.  For those of you who don’t remember, it was to accept.  The primary idea being that acceptance would rid me of the judgment which shrouds me in a thick cloak of negativity.

After the night I just had and some other thoughts I’ve been bouncing around lately, I feel that I need to amend that.  Because lately, I have been accepting too much.  I’ve accepted that there’s nothing wrong with a day off from exercising or reading or writing or any of the other activities that are so important to my self care regiment.  I’ve accepted myself for sitting on the couch in front of the tv and just vegging because I had a tough day or was really tired or totally stressed out.  In short, I’ve accepted a whole bunch of things that are not good for me.

The problem with acceptance in the context I’ve been employing it is that it allowed me to shirk my responsibilities.  And that’s what karate and reading and writing and exercise are- responsibilities.  Basic hygiene.  Not for my mouth or my B.O. but for my mental health.  These activities keep me sane, plain and simple.  And when I don’t do them things tend to go very poorly for me.

Now, re-reading that entry on acceptance it’s clear to me that what I’ve been doing is not at all what I intended.  I talked about all of these great activities that I wanted to do with the hope that doing them without judgment would lead me to excel at them.  I didn’t talk about accepting a lack of action on my part and just excusing what is ultimately me being lazy about my own self care.

So I need to clarify the goal for myself.  Acceptance is nothing without accountability.  Because regardless of how tired or pissed off or headachey or just plain-old BLAH I’m feeling I still have to do what I have to do to take care of myself.  I have to hold myself accountable for my own, personal responsibilities.

So this is me making a new goal for myself in the year to come: To push myself with all my energy and intentions and accept the result of that.  Because things will still go as they go, crap will still happen, there will still be stress and worry and emotionally taxing moments and I have to accept that.  But the basic day to day necessities that keep me mentally and emotionally healthy are prime responsibilities- and if I don’t have them then I don’t have a chance in hell of accepting the rest of it.
Posted by Bevimus at Tuesday, July 10, 2012 4 comments:

Last year one of my top reads was Bloodsucking Fiends by Christopher Moore.  I am way overdue to read the sequel.  I am currently working on rectifying this.  Stay tuned.
Posted by Bevimus at Sunday, July 08, 2012 No comments:

Email ThisBlogThis!Share to TwitterShare to FacebookShare to Pinterest
Labels: 2012 Outdo Yourself Reading Challenge

Heat Wave was not a serious read so I'm not going to give it a terribly serious review.  I will simply say that, much like it's originating series, it was a lot of fun.

A few simple things that I absolutely loved: there is a doppelganger for every series regular and they all have the same quirks, use the same banter, and do the same moves so it feels right at home.  And the Castle doppelganger?  His name is Rook.  How great is that?  It's so obvious but it made me so happy, I can't even tell you.

It doesn't play out exactly like an episode of Castle; there are a few key differences.  Number one: Castle goes a lot quicker so the cases aren't as complicated.  Because this story had an entire book with which to play out the action there was a lot more going on: more suspects, more murders, more cases that end up being involved and more false endings.  The general line-up was the same in that the first suspect you meet is never the person who did it and the climax involves a life-threatening situation that is happily resolved; but there was a lot more detail to this case then you generally find in a Castle ep.  (Though I could easily see it as a two-parter.)

My main beef is that I imagine Castle to be a better writer than the writer of this book seems to be.  Or at least a more crime-focused writer.  This story had the tell-tale signs of a crime novel but it lost me in the romance department.  First off, it took Castle four full seasons just to get a steamy kiss in with his ingenue.  And secondly, the sex scene that the book jumps right into is straight out of a harlequin romance novel complete with firey metaphors and overly dramatic language.  Bleh.  There's also a lot more fluttering hearts and body-tightening glances than I can stomach and I wonder if maybe the series gets away with that better because they're showing rather than telling.  Either way, the series is far batter in that capacity than the book.

But, thankfully there is only the one nausea-inducing sex scene and the bulk of the story is the comical banter and crime drama from Castle that I love so I can forgive the writer and still enjoy the story.  And while I wouldn't recommended this book to everyone I would definitely recommend it to Castle fans (but I would recommend you skip the sex scene).
Posted by Bevimus at Saturday, July 07, 2012 2 comments: