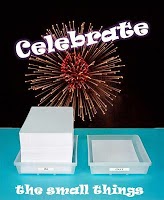 Hi!  So, as you may have noticed, I haven't participated in this blog hop for a LOOOOOOOONNNG time.  And oddly enough, I'm not going to be participating in it for a little while longer because next Friday and the following three after that I'll be posting letters for the A to Z Challenge instead of these posts.  But I will posting on at least a few of those Sundays to let you all know what I'm up to outside of trying to compose a 26 part story.  Like next Saturday, for example, I have a big race that I'm certainly going to want to tell you about (and to show you pictures of).

At any rate, all of that goes to lead to the first thing I'm celebrating this week:

WRITING  I'm writing again!  Fingers to keyboard, reading over Wikipedia articles, scraping and rewriting sentences- the whole nine!  It's been so incredibly long since I've written fiction that I'm honestly still a little shocked that I know how to do it.  I never thought I'd lost it altogether, but I did start to wonder about "if" rather than "when", to be perfectly honest.  It's just been so long since I'd had any desire whatsoever I'm totally out-of-mind excited to be doing it again.

Those of you who are also doing the challenge please come by and read- if I pull this thing off it'll be nothing short-of epic.  And I will be visiting as many of you as I can each day to see the awesome stuff you're writing!

RUNNING  As mentioned, I am still running and I had a rather large milestone last Saturday that I'm still geeking out about. 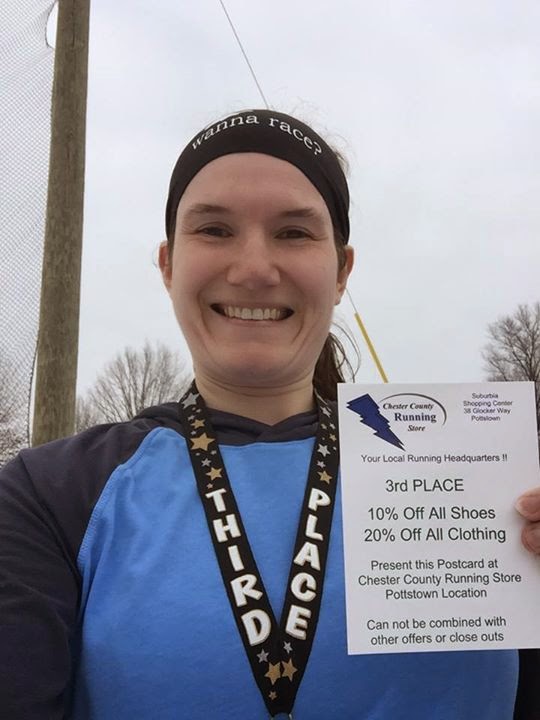 3rd place!  I've never placed in a race before!  How cool is that?!?
I'm trying not to lose the win in the context- like the fact that it snowed the day before so a whole lot of (presumably faster) people looked at their windows and went 'Hell no!" which left me to move up as I ran through 3 inches of snow.  But that's the cool part after all, isn't it?  I ran in the effing snow!  And I got 3rd place for doing it.  I don't care what the context, that's still awesome.  I'm thrilled.

I've got to get outside at least a couple of times before next Saturday because I have my first-ever 15K coming up which looks to be freaking awesome- they give us chocolate when we cross the finish line!  So like I said, I'll definitely be posting pictures of that.

LOVE  My very good friend from college who I get to see all of ONCE a year even though she doesn't live nearly far enough away to justify that rare of a visit (don't we all friends like that?) is having a baby in a couple of months.  Given that she will be swallowed by the chaos of newborn care-taking after that happens I talked her in to a quickie visit before her due date for some last minute baby-free talk and hang-out time.  I connected with her over Skype last night and I have to say that I just freaking LOVE her.

It helps that she is mother incarnate at the moment with that whole glow-thing going on and you can tell from the smile on her face that she's never been so thrilled about any endeavor she's ever undertaken before and it's just miraculous to see.  I'm so psyched to be seeing her and her wonderful hubby in a couple of weeks, I can't wait!

Happy Friday, everyone!  Looking forward to seeing you all during the A to Z challenge!

Email ThisBlogThis!Share to TwitterShare to FacebookShare to Pinterest
Labels: #atozchallenge, About Me, Celebrate the Small Things, Gratitude, On Writing, Running

It’s a feeling I haven’t had in quite some time- that nagging at the edges of awareness, that faint voice in the back of your head that won’t go away, those intrusive thoughts that interrupt your train of consciousness and make you realize that you’ve missed the reality of the past few moments- the words spoken, the light in the room, the shifting body of the person next you.  It’s been happening to me more and more lately forcing me to realize that there’s action to be taken if I hope to avoid continually slipping out of the moment and missing all those things.

A story.  A story must be written.

Like most stories, it’s been in my brain for a long while now.  First as an idea, just a flash of brilliance easily forgotten.  But then the words and images that get caught in the web it weaves in your thoughts.  Moments, phrases, descriptions.  All these getting caught in that sticky netting and becoming a barrier, a blockage to the regular train of thought.

I was at a concert on Saturday night, a really great one.  And I was angry to find that I’d missed some music because my mind got caught in that web again.  Then last night in the shower I washed my hair twice, not realizing until the second lather that I’d been composing sentences in my head rather than scrubbing.  That was it- I’d finally had enough.

So I sat down at my computer, and I wrote.  I opened up a Wikipedia page which invariably led to two others.  I looked through pictures on Google images.  I poured out paragraphs which, of course, were terrible and ill-formed on re-read.  But they were there.  Typed words in my word document.  An undeniable story that would be brought into existence by me.  Before I knew it it was one o’clock in the morning.  I haven’t gotten caught up in writing like that since the last NaNoWriMo I participated in- over a year and a half ago.

When I really look at it, I realize that I barely did any writing at all in almost the entirety of last year.  Sure, I celebrated some accomplishments on Friday blog hops.  I did 26 entries in April on the history of Tang Soo Do.  I wrote about my running, a lot.

In actuality I realize that running has sort-of replaced writing in my life.  Partially because it was new to me, I had a whole lot of firsts last year and I’m still having them (I won my first medal in a 5K this past Saturday- Third Place in my age bracket).  And partially because it’s so much more definable.  When you run, there’s undeniable proof that you’ve run.  A GPS map on the running app showing you your distance.  A runner’s bib verifying your participation in a race.  A medal that I proudly display on my wall.  It’s real, measurable, concrete.  Unlike writing which still seems so ethereal sometimes- words on the paper that my inner critic dismisses so easily, even after all these years.

But fiction- a story I composed, characters I created.  Details and settings and emotions and tiny little elements of memory that breathe life into the sentences- I haven’t done that in so long I honestly can’t remember.  Until last night.

So I did something crazy.  I went and signed up for the April A to Z challenge.  Sure, I’m number five thousand and whatever, at the bottom of the list.  And sure, I’ve now put an awful lot of pressure on myself to get 26 entries out of this story, not to mention a coherent narrative that connects each snippet of scene and dialogue.  And yeah, it could all blow up in my face so easily.  But I’m writing again.  And I’m pretty damned thrilled about it.

I know that I haven’t existed in the blogosphere for so long that people who used to frequent this site have all but forgotten about me.  And I know I’ll have to re-earn every follower by reading and commenting and giving before I can reasonably expect anyone to come back here.  And I know that half the point of the April challenge, if not the majority of the point, is visiting and commenting rather than writing yourself.   But I want to do both.  I NEED to do both.  It’s been far too long since I’ve done this, any of this.

So I know I missed the big theme reveal.  And I know that probably only two or three people are gonna read this anyway.  But I’m saying it more to myself than anyone who may happen to read these words.  I'm declaring it, so I'll have to do it.

I’m writing a story.  In 26 parts.  For the April A to Z Challenge, my contribution:

Scenes From An American Diner