Without planning to, I ended up watching a couple of films this weekend which I loved so much that I just have to say a few words about each of them.  It was a completely unexpected coincidence that they both happened to deal with the subject of grief, which is why I deemed it appropriate to include them in the same entry.

Fist up, a new story by my absolute favorite filmmaker of all time: Zach Braff. 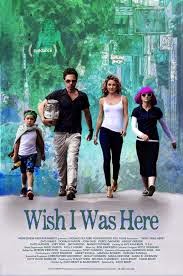 I first encountered the genius that is Zach Braff in 2004 when I saw what became my favorite film of all time: Garden State.  That movie effected me more than anything else I've seen.  And while I can't say that this film replaced it in the pantheon of film gods I will definitely say I'll be housing it in the same temple in my heart.

Braff's familiar style is all over this movie: the characters desperately trying to make their way through life's seemingly meaningless pain, the strikingly honest dialogue, the visually stunning vistas as characters look out on their world and, of course, the award-winning soundtrack.

And it deals with similar subject matter: the concepts of family, identity and grief.  Here the main character is an almost middle-aged man struggling with a career that didn't pan out, a wife struggling to keep the family together and a father whose cancer has returned with a death knell.  Braff portrays a lot of the same issues with this character as he did with Garden State: a conflicted and rich relationship with his father,  a pure and authentic love for his significant other and uncertainty about who he is supposed to be.  Here he has the added roles of brother and father and he pulls off both wonderfully.  The primary difference here is that while Andrew Largeman was trying to find home Aidan Bloom is trying to hold his together.

The trailers I've seen have all sold this movie as a journey of self discovery but what it really focuses on is grief- Aidan's father is dying and regardless of what else is going on here that is the primary story.  It plays into his career (after all, a father is supposed to provide for his family) and his relationship with his children (wanting to do for them what his father failed to do for him while still building their grandfather's legacy and teaching them about his life) and certainly who he is as a man who was raised by this person- but all of that is related to the fast-approaching loss.

Mandy Patinkin is, as always, incredible as the ailing patriarch and brings oceans of depth to this father struggling to make amends with his sons before dying.  Kate Hudson is the best that I've ever seen her in any film and portrays the mother of this family with disarming honesty.  (I also think that character was written brilliantly and Braff did a fantastic job of portraying the pushes and pulls that matriarchs struggle with).

But the most fantastic performance by far was one that I didn't expect: Josh Gad portrays Noah, Aidan's younger brother who has failed to really launch and lives an isolated life after the death of their mother whom he was more close to anyone else.  Noah and his father have been estranged for over a year due to his father's criticism of him and he fights Aidan's requests to go visit him because of this.  There's a pivotal scene near the end when Aidan's daughter begs Noah to go see her grandfather and he almost magically transforms into a frightened child before our eyes.  There are few moments in movie history that so clearly capture the fear and helplessness one faces when confronted with death and he did it breathtakingly.

In the end, I deeply adored this movie.  It'll be a favorite of mine held in the highest regard for many years to come. 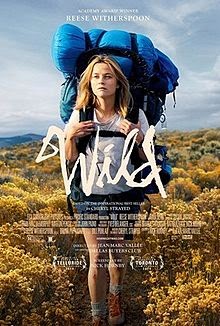 This movie comes from a book of the same title (which of course I have to read now) by a woman named Cheryl Strayed who overcame life-altering grief by hiking 1,100 miles on the Pacific Crest trail.  (Since I haven't read the book yet keep in mind that this review is exclusively about the movie.)

This movie was extremely similar in style to another movie I loved modeled after another fantastic book: Into the Wild.  They deal with similar subject matter- both portraying individuals surviving in the wilderness alone with little to no training after suffering from various traumas.  The primary difference is that while the protagonist of Into the Wild dies due to his inexperience Cheryl Strayed lives to tell her tale and subsequently it is one of triumph rather than tragedy.

I don't mean to make it sound that similar- Strayed was on a relatively well-traveled path with frequent meet-ups with civilization where she received a great deal of assistance while McCandless went out into the uncharted wilderness alone with express intent of never meeting up with anyone.  (I.E. there are very obvious reasons why Strayed lived and McCandless died.)  But story-telling wise they're very similar- the current story is interspersed with flashbacks of the past explaining why the characters are on the journey they're on.

I went into this movie thinking that the main character was trying to recover from a failed marriage and struggling to reinvent herself after that.  In actuality, while her marriage did in fact fail that was a result of her grief after her mother, whom she titled 'the love of my life', died suddenly from cancer.  Her loss was so overwhelming that she lost herself in both heroin and sexual addiction as a result of it and didn't emerge until several years and a divorce later at which time she concluded that in order to heal she needed to get some time away from her life to make sense of it all.  Why did she take that time on the Pacific Crest Trail?  Because her mother had taught her that one needs to put themselves "in the way of beauty" and she couldn't think of a better place to find that.

This movie struck several chords with me.  On a superficial level, I enjoyed some of the difficulties of backpacking portrayed- I too have walked with a 70 pound pack on my back, eaten "cold mush" for multiple meals due to a stove not working properly, been pained by bruised hips and slept in tents in less-than-ideal conditions.  While she did it alone for 1,100 miles I did it with a group for less than 30.  But still, familiar.

On a deeper level, I responded to the idea that when faced with inescapably quiet moments one will face down some of the darkest moments of memory and come out (due to a lot of willpower) stronger because of it.  And that's really what this movie is about- it isn't the hike itself that serves to force her to face her past, it's her isolation.  Her alone on the trail with nothing but her own thoughts to occupy her.  And while her personal struggles to overcome the extreme hardships of the epic hike certainly shape her what really heals her is willingness to come face to face with her darkness and forgive herself for it.   This movie does a fantastic job of portraying that.

Or course Reese Witherspoon did a fantastic portrayal of Cheryl and I'm gonna go ahead and call her nomination for best actress as a given.  Laura Dern gave the best performance of the film as her mother, though.  Though she's only in a few frames she pumps so much life into Cheryl's mother that it's easy to see why the loss of that woman could destroy a person.  I know Jean-Marc Vallée from Dallas Buyers Club but I must say I appreciate him a thousand times more here because the film plays the way one imagines the true experience would with Cheryl's memories coming on in flashes, sometimes overwhelmingly intense, but always without purposeful recollection.  It feels really organic in that way.

The other folks she meets on the trail, the breathtaking landscapes she encounters and the full breaths she takes of what is clearly renewing air round out the cast here and all of them hold full weight whenever they're on screen.  It was a masterfully done piece on the whole.

I plan to read the book at some point before the year passes because one imagines that if the movie is this good the source must be that much more powerful.  (Plus a friend of mine said she read it and loved it and I totally trust her judgement.)  So I'm gonna go ahead and recommend both.
Posted by Bevimus at Tuesday, January 06, 2015 6 comments: