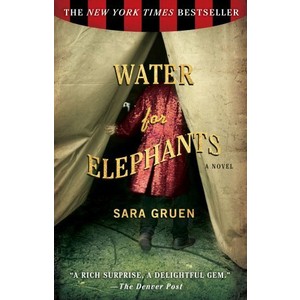 *As always, WARNING: THIS REVIEW CONTAINS SPOILERS.
I'm not sure what it is about the mystique of circuses.  Maybe it's one of those things that is so deeply engraved in the landscape of our popular culture that we can't separate the stories and images from memory.  Whatever the cause, this book was familiar to me.  The setting, the characters, the scenes- all held some nostalgia even in the midst of some really horrifying events.  Too many movies set in the great depression, maybe.  Too many cultural references.

It's strange, of course, to have nostalgia for a time you've only studied in American history, for images you've only seen in movies.  But perhaps that's why I'm nostalgic- if I'd encountered any of these things in real life they probably would have been horrifying (not to mention that I'd be old enough not to remember having encountered any of it, anyway).  Rough men living day by day in harsh times, drunks slobbering and leering over scantily clad women, disabled and malformed people being stared at by frightened children, animals being beaten and tortured in horrific conditions.  None of these are happy things.  And yet there's that strange nostalgia- I have seen these things before.

The reason why is because Gruen does such a fantastic job of describing it.  The front cover includes a quote describing the book as "sensual" but that fails to cover it.  It's visceral.  The sounds, smells and physical sensations are described so exactly you feel it in your gut.  This book does a better job of that than anything I've read in a long time.

Which isn't to say that the characters aren't memorable on their own- because they certainly are.  But they're made far more real and alive because of the ways in which they react to this environment they're in.  Hell, we spend so much time inside Jacob's own body we damned near feel like we are him.  And that's a pretty impressive feat.

The plot was, in some ways, the most disappointing element of the whole story.  I'm not sure why, exactly, but boy meets girl just doesn't do it for me anymore.  Part of me wanted Marlena to end up being a bitch so Jacob could run off with Walter and the two of them could get into shenanigans of their own.  But alas, that's not what makes the big bucks and subsequently not where this book ended up.  But at least Rosie got her well deserved revenge in the end- one that I did not at all see coming from the prologue.  And in the very end, I suppose an old man running off to join the circus isn't a bad note, either.

Overall, very worth the read.  And I'm intrigued enough to see what else Sara Gruen has got up her sleeve.
Posted by Bevimus at Sunday, November 15, 2015 2 comments: