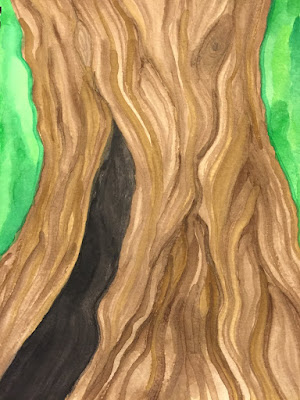 When she thought about it she realized the journey began long before she started it.  That internal sense of desperation for something, somewhere that would make sense of life.  That yearning for a feeling of peace.  That panicked, frenzied need for a life raft in the tumultuous seas of existence.  She'd been seeking her whole life.

Her quest sent her in the usual directions: false prophets and misguided philosophers.  Teachers that claimed to know the true path.  Countless books and lectures and exercises all meant to bring clarity and true sight.  But that voice was still there, underneath it all.  Questioning, judging, hating.  And that desperate seeking only increased.

She heard of a place where she might finally find the answers she sought.  But as with all important journeys, this one wasn't easy.  It was a path that wound deep down into the earth, through dark places and frightening possibilities, before finally emerging on a mountain side and culminating with a long trek up into the heavens.

She hesitated- it was a habit born out of constant uncertainty and fear.  But her seeking had led her to some fundamental truths and she knew enough to believe that she had to try, because her soul's thirst  must be quenched.

So she set out, entering into the forest where she was told not to go, looking for the great tree of the stories.  She was fearful upon entering the densely wooded place- so many stories of the evil of witches, the cult of enlightenment.  But she cast these thoughts aside and trusted.

Trusted the simple steps of her feet, the beating of her heart, the movement of her limbs as she crept ever deeper into the woods where the scent of earth was so strong she could taste it.  She felt a peace here, among the sunlight in the leaves and the heaviness of the soil underneath her.  She felt a presence leading her forward, away from the noise of her life and into the quiet of the earth.

And in the stillness she found the ancient tree of the stories with its branches stretching up towards the heavens and its root burrowing deep into the ground.  And there among the unbreakable roots she found the gap in the wood- the narrow opening leading down.

She paused, wondering what would happen if she went further.  But with a steadying breath the trust returned.  "Go down." she heard herself say.  So she did.
Posted by Bevimus at Friday, January 15, 2016