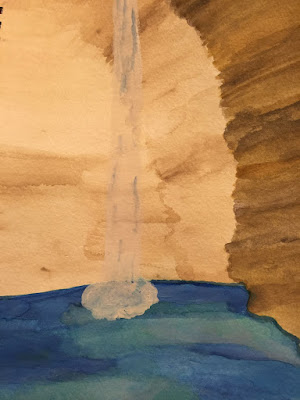 The roots of the great tree wound deep into the earth, twisting and winding through the dense terra.  The pathway was narrow and soon became too dark to see and her hands constantly caught in the soil as she tried to steady her descent.  But without her sight she found the touch comforting- a constant reminder of her solid grounding.

"Just be here," she found herself saying when fear crept into her mind.

After what seemed like a long time her fingers began to slide over the surface of jagged rock.  At first sharp edges would poke out from the soil in intermittent crevices.  As she continued on the surface transitioned to hard, smooth stone.  She followed it ever downward, the stone becoming wet and slippery as she moved on.

Soon the sound of water entered her ears- a dripping as if she was entering a cavern.  The wet droplets echoed off the stone walls as she picked her way ever so slowly down.  Then a light began to reflect off the wet surfaces.  At first she thought she'd been in darkness so long her mind was playing tricks on her.  But as she crept further down it grew.  The dripping turned into a constant sound and as she listened she heard a heavy rush of water coming from beyond.

Before long the walls of narrow passage widened and she found herself entering a large cave that stretched high up to the surface where a small opening allowed sunlight and the rushing torrent of water through.  She stared at the waterfall and found herself mesmerized by the glistening surface of the lake it splashed into to.

She searched for a way around the edges of the underground lake but found nothing but steep walls of rock stretching upward on both sides.  She waded just a little ways in until she spotted a shore on the far end of the massive cave.  She stopped then, fear once again grasping her heart.  Would she be able to swim?  What if her pack weighed her down- she could drown there.

But again she breathed, and again trust returned.  The same steady voice that he led her down gave her the next step: "Swim."

She stepped out into the deeper water and stretched her arms over the crystalline surface.  The liquid was surprisingly warm and felt amazing sliding over her skin.  She let go then, her body moving without effort, her mind marveling at how easily she glided.  It was as if the world had wanted her here, had been calling her for years.  She reveled in it: the sensation, the sound, the fluid movement.  A million emotions seemed to wash over her as she swam past the waterfall to the far side- emotions that had laid dormant inside of her for longer than she realized.

It was here that she confronted another lie that had led her actions for so long: the belief that her emotions made her weak.  That the very things that could guide her so fluidly through life somehow made her less than those she admired for their intellect and stony, steadfast appearance.  But here in this space it seemed that everything she 'd derided herself for feeling was finally set free.

She was glad to to finally succumb to them, glad to finally give up the fruitless fight.  She made a promise to remember the feeling and the freedom that came from allowing herself to fully experience it.  And she vowed to never again stifle what was authentic within her.

And as she slowly climbed the far shore of the cave she looked back out at the great lake she had just crossed and said a prayer of gratitude to everything that brought her there.
Posted by Bevimus at Saturday, January 16, 2016

Email ThisBlogThis!Share to TwitterShare to FacebookShare to Pinterest
Labels: About Me, Based very very loosely on a true story, Gratitude, Spirituality, The Seeker, Yoga