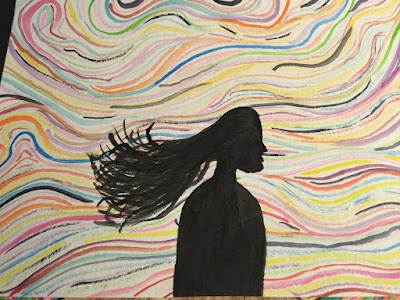 She climbed higher into the mountain pass, her determination growing with her strides.  She was feeling bold and strong and connected- but she wasn't.

A gust of wind knocked her clear off her feet and she tumbled over a bolder on the edge, landing slightly further down the rocky surface and taking a scrape on the leg as payment for her troubles.  Anger burst out suddenly and violently as she cursed out loud at her pain, followed by surprise as the sound echoed off the rock walls to her left.

Distracted from the sting she looked up at the high stone face above and around her, and testing, shouted again.

"Hello!" she called, her voice louder and more jubilant than before.

The mountain seemed to repeat her greeting as if on its own accord.  She called again, testing the limits of her sound.  Again the echo bounced her call back.  Soon she was conversing with the stone giant she sat on, call and response flying through the temporarily still air.  She could feel the vibration of the sound reverberating not only off the stone wall, but through the ground itself.  And as it moved she felt that same vibration enter her through her root, up her spine and finally out of her mouth as she called again.  She and the mountain were feeding each other in one continuous, wavering loop of sound.

The wind kicked up again and stole away the echo, replacing it with a screaming wall of air speeding up the mountain.  She peered over the ledge at its source from below and was greeted by a smack of cold, fast sky in her face.  It pulled her hair back from her scalp in a torrent of power and sound.  But she didn't move, she just closed her eyes and let it hit her.  She felt the power and the life again, and the sound in her ears was deafening.

She inhaled and forced the sound again, letting the wind steal it from her lips and join its raging movement up to the heavens.

And although the wind stole her voice she knew it carried it all the way up the the heavens.

"I am here!" she cried again, watching the colorful wind sweep the sound up and up and up.

And then, without audible sound, she repeated the message to herself:  I am here.
Posted by Bevimus at Wednesday, January 20, 2016