2016: The Year of Writing Dangerously 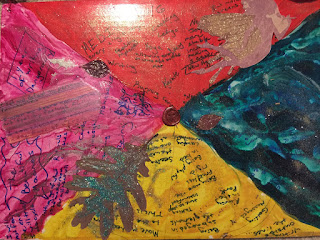 So, of course I have a lot of goals for 2016.  Meditate- every single day.  Read more.  (A lot more!)  Eat healthier.  Run more.  Stop wasting so much damned time on my phone.  Finish my 200 hour yoga certification.  Paint.  Spend more time in nature.  Teach a regular and ongoing yoga meet-up.  Get on the phone or skype with my awesome friends more.  Clean and organize.  I'm sure there are others...

The old me would have felt anxious with the number and scope of these goals.  I would've set challenges to try to get myself to do them.  That drill sergeant voice would've kicked in telling me to "GET IT DONE!".   The annihilator would've followed up with all the reasons why I couldn't.  (It's a viscous cycle.)

But I'm doing things different nowadays.  I'm approaching things with a gentler, kinder attitude towards myself.  What I was saying yesterday- it's not about the finished product, it's about getting super messy while making it.  I want to approach this goal with the reckless, joyful abandon of a two year old.  I want to soak it in.  I want to breathe.

So as strict as this goal may seem, it's not.  I'm not approaching it that way. I'm approaching it the same way I do my meditation practice- it's not about scrambling to make the time to sit and breathe for ten minutes.  It's about giving myself the gift of space in which to exist for ten minutes.  It's a break in the chaos of the morning rush.  It's a quiet moment that is just for me (and God, the universe and everything).  I want this to be the same.

I've won NaNoWriMo five times.  For five November's I've barreled past the 50K word mark.  And I did it by following the rules: being creative without judgement.  Not editing.  Writing like I was being chased by a shark and the words were the power to my lifeboat.  Swinging from idea to idea like a crazy, squealing, poo-flinging monkey.  Those are the rules of NaNo.

And they're the rules of The Night of Writing Dangerously- their annual event where they pack a bunch of writers into a ballroom in San Francisco and feed them coffee and candy to get them to write as much as they possibly can in a night to raise money for a NaNo charity.  (I've never been but if I lived anywhere near San Francisco you can bet I would have.)  Needless to say, in that kind of environment, a lot of a amazing stuff takes place.

So I want to approach this year with that same attitude: holding the space for that wild abandon to take place in.  (Thus, the title.)  Giving myself the gift of time to write.   Going at it with unbridled, enthusiastic passion AND the quiet wisdom of a yogini.  Combining all I've been with all I am becoming.

One year of daily writing.  For me.  And of course, I have to believe the rest of the world will somehow benefit from me finally figuring out how to tap into this wellspring of writing desire I've always had.

The rules I'm setting for myself are simple: write everyday.  Try to make at least one entry a week be fiction.  Don't edit (save for typos).  Be crazy, be daring, be dangerous.  But above all, have fun.  Don't hate it.  That's the real goal.  Writing while not hating writing.

I assume there'll be A LOT of non-fiction.  Me talking about yoga, about life, about whatever insight I feel like writing down that day.  I'd be lying if I said that's why I'm doing this but I'm not being so strict as to say that some pretty amazing stuff couldn't come out of that, either.  Hopefully there'll be some poetry.  I really like poetry and I'd love to write it without immediately judging and scrapping it.  And hopefully I'll finally get those stories- the ones that have been nibbling at the corners of my consciousness but I've never taken time to write because of my firm belief that they couldn't possibly come out the way I want them to.  That's what I really want to tap into.

Of course, I hope you'll all join me on this journey (otherwise, why would I be posting it online?)  But really, it's about me.  So even if no one ever reads this stuff- if it never goes anywhere, I never try to publish, not a single thing other than me having written comes out it- that'll be more than good enough for me.  It's practice, afterall.  It's the journey, not the destination.  It's the space in which to write... dangerously.  ^_^
Posted by Bevimus at Friday, January 01, 2016

Email ThisBlogThis!Share to TwitterShare to FacebookShare to Pinterest
Labels: #amwriting, 2016: The Year of Writing Dangerously, About Me, On Writing, Spirituality, Writing Exercises, Yoga