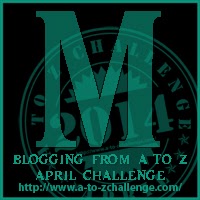 M is for Moo Duk Kwan

Moo Duk Kwan is the name of the branch of martial arts I study, the literal translation of which is "School of Martial Virtue".  It was founded by Grandmaster Hwang Kee who combined Chinese martial arts, Okinawan techniques, the ancient martial arts system of Korea and the philosophy of Tao to form the principles of the system.

This is the official emblem of Moo Duk Kwan.  Each element is representative of the history and foundations of the system. 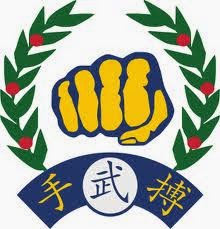 Leaves- The 14 leaves represent the 14 provinces of Korea, joined together in peace.

Berries- The six berries represent  the six major continents and also stand for the fruitful result of training.  The color comes from the Yang principle of Taoism.

Scroll- The bottom scroll stands for knowledge.  Grandmaster Hwang Kee is quoted as saying "the martial artist should be a scholar", a belief which is reflected in the midnight blue color of our belts which represent perpetual growth and unending learning.  The color comes from the Um principle.

I've always found it interesting that martial arts- not just Tang Soo Do but all martial arts- have a similar philosophy of NOT fighting given that the techniques studied are fighting techniques.  But when you really look at martial artists you see that they are not aggressive people but rather humble scholars who utilize the disciplined structure to create peace within themselves.

Our Sah Bom Nim tells us often that Tang Soo Do saved his life- before he started studying he was lost and his anger and helplessness to control the events of his life led him to fighting and negative behavior.  He began studying martial arts and found a system to help him control and redirect his aggression.  Every respectable martial artist I've encountered has a similar story, and this points to the true nature of martial arts.

Forgive me for getting nostalgic, but I cite the classic 80's phenomenon The Karate Kid as a good example of what martial arts is really about.  Mr. Miyagi teaches the principles of self-control, respect and discipline and tries to resolve conflict peacefully whenever possible, using the techniques themselves as a last option when attacked.

I can personally attest to the fact that studying martial arts has changed me, and continues to change me in a more positive way than anything else I've encountered.  I go to class after a long work week feeling stressed, frustrated and generally pissed-off at the world and I walk out so elated and relieved it feels as though I'm walking on air.  Absolutely nothing in my life has done more to improve my self-esteem and nothing gives me as much peace.  I don't mean to soapbox and I by no means intend to state that martial arts is the only way to improve oneself- but it is the most effective way I've found.

I've said a million times before and I will undoubtedly say it a trillion times more: I'd be a crazy person without Tang Soo Do.
Posted by Bevimus at Tuesday, April 15, 2014

Email ThisBlogThis!Share to TwitterShare to FacebookShare to Pinterest
Labels: #atozchallenge, 2014 A to Z Challenge, About Me, Martial Arts