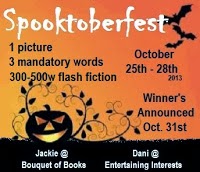 Hosted by Dani at Entertaining Interests and Jax at Bouquet of Books!  Click either link to sign up, see the rules, and post your spooky story!

For my story, I picked the super spooky lonely road photo prompt: 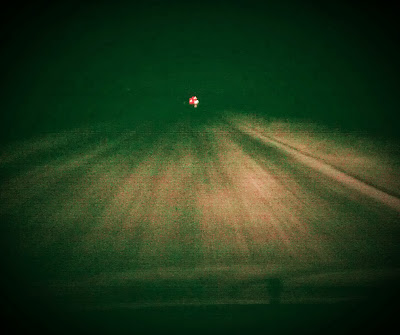 And here's the story I came up with to go along with it: clocking it at 495 words, I call it:

10:27pm
It was taking too long- she’d never make it.  The elaborate sequin and lace mask on the passenger’s seat next to her seemed to mock her efforts as she pushed down on the gas pedal.  She cursed the accident she’d passed and all the wretched traffic it had caused, then looked on at the empty road in front of her in confusion- where had everyone gone?

A glance in the rearview mirror did nothing to allay her fears as only darkness was reflected.  It seemed like the whole world had vanished since she’d passed the twisted metal and flashing red and blue lights.

“It’s just a spooky road, Jess- get a hold of yourself!” she chastised her reflection.

Drew had always made fun of her for letting her imagination get the better of her on the last day of October.  He’d teased her for having the same fear reaction as a five year old out for their first night of trick-or-treating.  She’d always pouted at him and pointed out that lots of people believed in supernatural events and the like.  Plus what fun was the holiday without some fear?

Now he was gone, just another skeleton in her closet full of ex-boyfriends and emotional baggage.

"Good Riddance," she said to the empty air.

She smoothed the front of her dress and let her mind drift to thoughts of sangria cocktails and handsome faces partially obscured by masks.  She’d spent a fortune on the costume and she was planning on making it worth every single penny.  She would flirt and laugh with the abandon that one can only feel from a secret identity- the mask was her ticket to a night away from herself.  But only if she could get to the damned place.

A glance at the clock in her dashboard made her breath catch in her throat- 10:27pm?  It couldn’t be.  It had said that the last time she’d glanced at it- before she’d passed by the wreck- and she’d been driving for at least… well how long had it been?

She fumbled in her bag for her cell phone hoping to flash the true time.  She couldn’t miss this party- not after so much preparation.  She looked over to try to get a view of the messy interior and then screamed as a set of headlights appeared in front of her.  They had come without warning, blinding her and blocking out the night.  Reflexively she jerked the wheel and the car jolted to the right. There was a flash of light as the head lights filled her sight and the deafening sound of metal scraping as the cars collided.  And then… nothing.

The dark road stretched out in front of her.  The clock shone the time of her death, forever etched in the stone of time.  10:27pm.

But she didn't know why her clock was stuck on that image, and she didn't have time to wonder.

She had a party to get to.

And now, hop along to read all the other spooky stories!