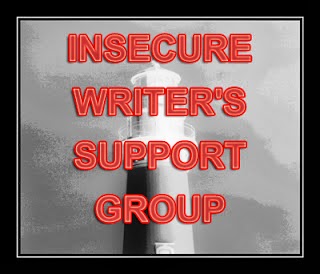 Hello everyone!  And welcome to another awesome installment of the Insecure Writer’s Support Group!  Led by our indomitable leader Ninja Captain Alex J. Cavanaugh we gather on the first Wednesday of each month to share and encourage, express doubts and concerns, or offer assistance and guidance.  Be sure to head by the Ninja’s lair today to hear the BIG NEWS!

This month is especially awesome for me since I’m co-hosting!  Along with the amazing Julie Luek, Rachna Chabria and Ilima Todd!  Please take a moment to thank all my awesome co-hosts in your travels today.

I wanted to write something special for my month as co-host but I’ve also got a book cover to reveal for my wonderful friend Crystal Collier so I’m going to relay a short but potent anecdote from my early life as a writer.

One of my classes in college was playwriting and my teacher was a relatively famous playwright known for being tough and wonderfully inspiring.  The first course I took with him- an introductory course- was fun.  We were learning the ins and outs of the genre, reading lots of plays, taking risks.  There were few requirements on what you produced other than simple scenes and plot devices.  I had a ball.

Then I moved onto the real work- intermediate playwriting.  The task was to write ten new pages a week with the ultimate goal of coming out of the semester with a rough draft of a finished play.  They didn’t have to be good pages, my teacher often reminded us, they just had to be new.  Why?  Because that’s how you learn.

Well, this probably won’t surprise any of you, but I struggled with this.  I’ve always been a bit of a perfectionist about my writing.  I had to believe it was good in order to be able to share it with anyone.  So rather than producing ten new pages of material I would hand in two that I’d revised five times over.  And even those I would judge as not up to snuff.  Needless to say, this was not ok with my teacher.

So one day after class he asked me to stay and chat with him.

He sat me down and told me- point blank- “This is not going to work.”

I thought he meant the class, that I was failing.

I looked at him like a dear in headlights.

He explained.  Becoming a writer, he said, is learning how to mold and shape the ideas in your head.  It’s polishing the little details, the nuances that make the different elements shine.   It’s tweaking, in other words.  Which all means that you have to have something to tweak.  He told me that I’d never become a writer if I didn’t, you know, WRITE.

It’s the single greatest and most important lesson for me, and one I still struggle with.  Because that tendency to judge- to scrap the story idea or the sentence before I let it cross my fingers- is still there.  The desire not to share anything unless it really is “good” still inhibits me sometimes.  But sometimes, I write anyway.  And the one thing that I know unequivocally is that anything you’ve written- really, ANYTHING- is better than anything you haven’t.  Simply because it exists- you have something to tweak.

So I tell you all the same thing I tell myself everyday: just write.  No matter how stupid, how silly, how simple, how insert-insult-here it is; write it anyway.  You can tweak it once you’ve written it.  And you might actually turn it into something “good”.  But even if you don’t, you’ll still be better simply for having written it.  Just write.  That’s all.

A big thanks to Alex for the honor of co-hosting this month.  Please make sure to visit some of the other bloggers from the list on Alex's page and spread the love!

And now, without further ado: The cover For Crystal Collier’s new book Moonless: 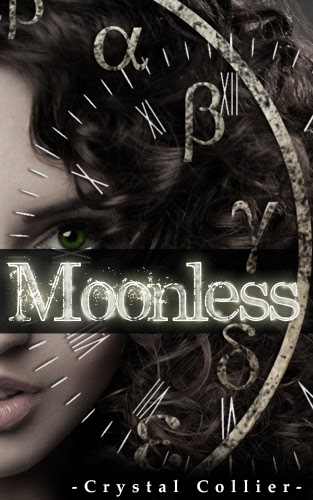 ﻿In the English society of 1768 where women are bred to marry, unattractive Alexia, just sixteen, believes she will end up alone. But on the county doorstep of a neighbor’s estate, she meets a man straight out of her nightmares, one whose blue eyes threaten to consume her whole world—especially later when she discovers him standing over her murdered host in the middle of the night.

Among the many things to change for her that evening are: her physical appearance—from ghastly to breathtaking, an epidemic of night terrors predicting the future, and the blue-eyed man’s unexpected infusion into her life. Not only do his appearances precede tragedies, but they’re echoed by the arrival of ravenous, black-robed wraiths on moonless nights.

Unable to decide whether he is one of these monsters or protecting her from them, she uncovers what her father has been concealing: truths about her own identity, about the blue-eyed man, and about love. After an attack close to home, Alexia realizes she cannot keep one foot in her old life and one in this new world. To protect her family she must either be sold into a loveless marriage, or escape with the man of her dreams and risk becoming one of the Soulless.

This awesome title is going to be released on November 13th and all sorts of cool things will be popping up around the web as the time approaches.  Go here for the full list of participating bloggers.

Crystal, author of MOONLESS, is a former composer/writer for Black Diamond Productions. She can be found practicing her brother-induced ninja skills while teaching children or madly typing about fantastic and impossible creatures. She has lived from coast to coast and now calls Florida home with her creative husband, three littles, and “friend” (a.k.a. the zombie locked in her closet). Secretly, she dreams of world domination and a bottomless supply of cheese. You can find her on her blog and Facebook, or follow her on Twitter.
Posted by Bevimus at Wednesday, October 02, 2013