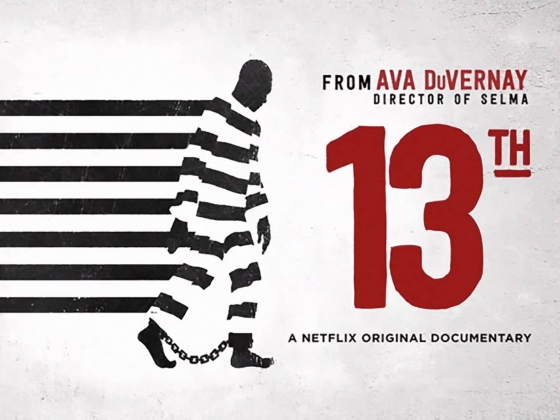 This was, by far, the hardest watch yet.  I Am Not Your Negro was a fluffy hug by comparison.  While not necessarily designed to shock or appall, the information and media used in this film is both shocking and appalling, and I was HURTING by the end of it.  So, for those squeamish, fair warning.

Like a lot of average Amerian kids, I grew up with the white-washed version of history:
Slavery happened, back in the dark ages,
segregation was terrible,
the civil rights movement fixed it,
thank god- lets move on.

I didn't experience a massive amount of white guilt in learning this Disney-version of history because that's exactly what it's designed to do: help white people forget the horrors of the ancestry of this country.  Regardless of whether or not there are slave owners on your family tree we all live here and unfortunately the sins of the fathers are passed down to ALL of us.

The ACTUAL history of slavery in America, I have now learned, is this:
Slavery happened, in an America so much more similar to the one we currently live in than anyone would like to admit,
and never... actually went away.
It changed form, and now the systems that support it are so deeply ingrained in society that the only way to actually fix it is to rebuild... pretty much everything.

WHAT!?!  Pretty fucking horrifying.  John Oliver related it to the shock many experienced when learning about the Tulsa massacre from watching Watchmen.  I've heard the expression "waking up white"- I think that's what this feeling is.

To learn that the absolute worst period of American history is not in any way, shape, or form actually history caused me actual physical pain.  I was at times nauseous, tearful, clenching, fidgeting, and ultimately drained by the end of it.  And that's an appropriate response, I think, to discovering just how truly horrific the state of this country actually is.

So, here's what I learned:  As soon as slavery 'ended', white supremacists (who did not stay in the south) extorted a loophole in the constitution- the 13th amendment (thus the title of the film) which states:
"Neither slavery nor involuntary servitude, except as a punishment for crime whereof the party shall have been duly convicted, shall exist within the United States, or any place subject to their jurisdiction."

This enabled the re-enslavement of black humans by the thousands under the guise of protecting communities from "criminals" after blacks were arrested (often for nothing at all) and used as free labor through convict leasing. In order to prevent the majority from becoming sympathetic to the plight of these "criminals", the media created the false narrative that black men were dangerous, violent, and actively looking for ways to harm the whites they resented for their past treatment and thus the black man = criminal myth was born.

The word criminal comes up in this film so much that I actually started to get a bit sick of it.  But I recognize what they're trying to do: point out how deeply ingrained this idea is within the entirety of the American psyche.  Countless psychological studies have proven that the average white person, regardless of their actual beliefs about race, will label a black man as suspicious when shown a series of neutral photographs of different races.  And there's an automatic, unspoken assumption that is deep within the mind of everyone who lives in this country- regardless of whether or not we recognize it.

This brainwashing is so destructive not only to people like me who grew up unaware of the racism I was trained to believe, but to the black identity in and of itself.  As one of the scholars pointed out: "So you have educated a public deliberately, over years, over decades, to believe that black men in particular, and black people in general, are criminals.  I want to be clear because I'm not just saying that white people believe this, right?  Black people also believe this and are terrified of our own selves."

Fuuuuucck,  Anyway, back to history: media continued to influence the American psyche and got a particularly big boost in 1915 with the release of "The Birth of a Nation" which depicted black men as, you guessed it, criminals and rapists and white supremacists- the KKK specifically- as heroic forces preserving the value of the American way of life.  (Horrifying fact: this was the first film in history ever to be screened at the White House.)  As a result of the popularity of this movie, people flocked to join their local chapter of the KKK and lynching became a fun evening activity for a lot of people who believed they were simply helping to keep their communities safe.

When this murderous form of racism became unpalatable to the average American, segregation was created as a solution to the problem.  I think most of us got some education on the horrors of segregation and Jim Crow laws but were also taught that the civil rights movement ultimately solved all the problems of this time.  Fun fact:  it didn't.  The 1964 Civil Rights Act and 1968 Fair Housing Act were supposed to end segregation, pay inequality, and discrimination by businesses and public facilities.   Housing is still very much segregated as are schools (no longer by force but by economic inequality).  The pay gap between white and black Americans is larger now than it was in the 60s when the civil rights movement was in full swing.  And discrimination by businesses is still rampant in this country and has been emboldened by the current sitting president and other outspoken white supremacists.

The Voting Rights Act was supposed to end gerrymandering  (it didn't), voter discrimination (it didn't), and voter suppression in general ultimately failed to end any of those practices that still very much take place today.  And thanks to the fact that any individual convicted of a federal crime is ineligible to vote the whole black man = criminal myth pretty much all but guarantees that voter suppression remains intact.  Which brings us back to crime.

The film then goes on to explain how being "tough on crime" became one of the core requirements for anyone, regardless of political party, to get elected.  They site specific laws advocated for and enacted by Nixon, Reagan, George Bush Sr., and Clinton and give the statistics on the number of jailed individuals going up by 200k increments, then a 500k increment, and finally a 1 million increase each decade since 1970.   And 40% of those now more than 2.2 million prisoners are black.  (That's in 4 black people in the country.)

With so many people in prison, and so many billions of dollars going into the creation of prisons, this birthed the prison industrial complex.  To learn that this complex is not only a multi billion dollar industry but that there are several legal systems in place which support it was disturbing on a level I was previously blind to.  And the fact that 97% of prisoners were sentenced by plea bargain rather than by trial ensures that this will continue.  Not to mention the legacy of police racially profiling and outright murdering black people.  We are living in the age of mass imprisonment.  The way that things were after the civil war when people were arrested, quite literally just for being black, and then imprisoned by a system designed to keep them in jail, and used as free labor while there- well, that's exactly the way things are now.

That's the primary point of this movie- slavery never really ended in the United States.  It simply changed forms.  It was always an economic institution first, driven by racism and white supremacy, and it still is.  And given the amount of profit the current system makes, it has become that much more difficult to try to dismantle this multi systemic machine.  Which means that it will take that many more of us fighting it for things to change.

The ACLU, Vera Institute of Justice, Brennan Center for Justice, Critical Resistance, and many, many other organizations have been working hard to make changes on all levels and to empower individuals to fight the systems within their local communities as well.  I as one person may not be able to do much, but there is strength in numbers and if enough of us educate ourselves to the way things really are (and this film is a good way to start that process) and start actually doing something about it, it will have to change.  It has to.