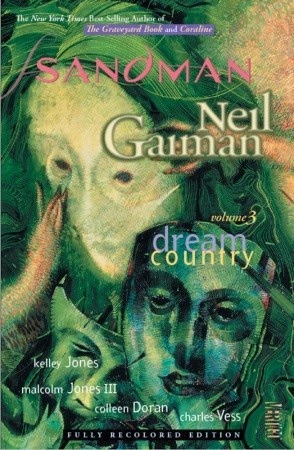 I was in love with this series after the first volume and although I am still very much enamored of the series overall I have to say that this is my least favorite thus far.  Why?  It's not because the quality of the writing or the artistry has diminished- not at all.  And It's not because they took the story in a direction that I didn't like.  No, it's because they dropped the story altogether.

Not that the transition from one to two wasn't a big shift- it was.  The first one is a quest for our title character to regain objects lost to him, and it takes him on a long, strange journey.  The second is a continuation of the story line of seemingly minor characters who appeared in the first and shows us more of the aftermath of the Sandman's disappearance.  It's a different story with different main characters- but it's part of the same time line.

This volume is not.  It's not even a novel, actually- it's a collection of short stories.  And while they all involve the title character in some way, they are otherwise completely unrelated- stand-alone tales with few commonalities.  And I couldn't hep but feel sort-of derailed after the first two.

Not that they're not good stories.  In fact, in some ways I'd say they're superior to the first two.  It seems that everyone involved is getting more comfortable with their own voice- whether it's the written words, the drawn lines or the brushed colors.  And these stories are poignant, heart breaking and haunting.

The crowning achievement is (of course) the award-winning A Midsummer Night's Dream.  (Click the link for all the rabid fan-boy loving that story deserves.)  Shakespeare lovers off all walks will absoltuley explode with love for that story, and for Neil himself.

The first and last stories are by far the most disturbing- one a look at what happens when a man's muse comes in physical form, and how completely one can devour another; and another a look at the ultimate cost of invincibility that will forever alter your view of superheroes.  They're both rich with dark, impossibly layered looks at the things that exist only in fantasy and yet are so steeped in the true reality of human qualities that you can't help but feel deeply disturbed upon reaching the end of them.  These are crosses between fantastical dreams and nightmares that leave you with a myriad of questions you never wanted to know the answers to.

The second story- A Dream of a Thousand Cats- is another question.  One you never thought to ask, probably, and the implications of which lead to a thousand more.  And yet, for reasons I'm not entirely sure of, I found it to be the most lackluster of the bunch and ultimately forgettable.

The last entry- not a finished story but a script- is a gift for those who ever wanted to know how a comic book gets written.  It's not only the typed pages of the script before it was drawn, but an actual conversation between the writer and the artist that shows you the inner workings of how the thing actually ends up getting made.  Stuff like this is usually never made publicly available and I have to give major props to everyone involved for being willing to pull back the curtain and invite everyone in to the process.  It's a gift for fans, no doubt.

Like I said, these stories are no less impressive that the first two volumes which I absolutely adored.  But I found myself struggling with them because of the lack of anchor.  Without a timeline to fit these tales into, without a narrative to tie them together and without an overall arc to give them a base I found myself feeling dissatisfied.  I think in materiel that already constantly questions the bounds of reality I need a more familiar structure to hold it all in place.

But that's just my beef- a personal preference, not a critique for the level of the work itself.  So if you like stand-alone comics then this collection will likely blow your mind.  And if you like this series you will love it no less after this.  But if you're like me, you'll likely find yourself praying that he returns to a novel structure and grounds it in an over-all story line in volume four.
Posted by Bevimus at Monday, February 17, 2014