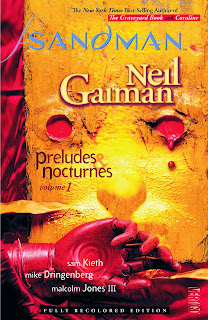 I've been hearing about this series for years.  My boyfriend (who is an avid comic reader) has told me that he's heard it lauded as one of the greatest series of all time.  Plus, Neil Gaiman is consistently spoken about as an utterly fantastic writer by everyone who I tend to bump into on the intarwebs.  In other words: this series' reputation preceded it.

Though I'm still digesting it I'm fairly confident that my opinion of this will ultimately be full of just as much love and praise as others have for it.  Gaiman's writing was reminiscent of very old stories with language you'd expect to find in legends and fables and the artwork often reminded me of artists I've been exposed to in series like Crossed.  Both the words and images are haunting and could most definitely give you nightmares if you read them right before bed.

I loved this first story line- Dream is mistakenly captured by an occultist who set out to capture his older sister, death, and imprisoned for 70 years.  The first story recalls what happens to people during that time and how Dream finally escapes.  The remaining stories follow dream as he tracks down the tools of his trade which were stolen from him upon his capture- his famous bag of sand, his helm and his ruby dreamstone.  His quest takes him to hell and back again and along the way he encounters characters at once familiar and brand new.

Cain and Abel- the brothers of biblical fame- are given new faces as occupants of dreamworld and keepers of stories.  The weird sisters of Shakespearean fame guide him to the the places where he may seek out his tools.  John Constantine, Lucifer himself, a host of demons and Dr. Destiny of DC comics are all here bringing with them references to their full canon and reminding anyone well versed in those canons of things they have already read, seen or encountered.

It's a little overwhelming, honestly.  As if someone took all of your comics, fables, myths, biblical stories and occult songs and stuck them into a blender.  The resulting words and images are so familiar it leaves you thinking you should go back and re-read (or read for the first time) so many stories that you could be kept busy in your library for years.

Having not read much of DC myself a lot of this was mostly new to me: I've only seen Constantine in the movie of the same title and I don't know the storyline of Dr. Destiny and Morpheus, so their battle was new to me here.  But these character's stories are so effortlessly intertwined with Dream's own that I can't help but feel like I should give them a try.

This series could be seriously addicting- not only to more Sandman stories (of which there are 11) but also to the other characters of the DC universe.  Thankfully, I already have volumes 2-4 so I can keep on reading and I believe- based on what people are saying on Goodreads- that it only gets better from here.