So, Apparently I AM that much of a masochist 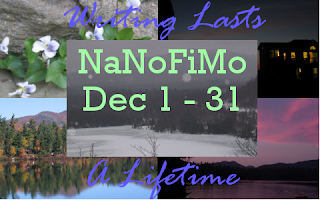 So, as I said, I crossed the 50k finish line.  And I had a terribly brief moment of "Go Me!!!  This is the best thing ever!!!" and I downloaded my little winner's icon (<---Look over there!  Isn't it pretty?), and I reveled in looking at my nice purple bar, and I enjoyed a few days off from writing.

Then today I sat down to just take a look at my story and maybe add to it a bit and make my final word count that much greater than 50k.  And I again thought about how much more there is to write.

I originally started jotting down notes as a brief outline for where the story would go on the very first day (November 2nd, as you may recall) and the timeline started with little Factin and ended with him some years later.  Of the 15 or so outline points that I had originally jotted down only about half of them have actually come to pass in the story.

He's about to meet the wizard who will become his mentor, but I haven't actually written the scene yet.  And there's a lot of cool training scenes I have in my mind between the two of them.
The two other characters he's with are so far from fleshed out it's a little ridiculous, plus through chatting about them over the break I had several moments of "oh yeah, I totally forgot that about him/her!".  This is not to say that the characters in this novel will be at all true to what was originally imagined, but I'd like to transfer at least a couple of the details.
There were many more battles I had in my head in which Factin would (god forbid) kick a little ass (magically speaking) and maybe, just maybe, mature into something more than the self-loathing, distrustful, spineless and relatively annoying adolescent he is currently.  (That'd be nice!)

So, with that in mind, I have decided to attempt, and baring any serious time-consuming catastrophes, complete NaNoFiMo or, National Novel Finishing Month.  Their tag line?  "One writer. One unfinished novel. On December 1, the battle begins."  (Kind-of love the sound of that!)  Their idea?  Complete your novel from NaNoWriMo by adding an additional 30,000 words by the end of the month.  Why 30k?  Because according to the FAQ on the website 80,000 words "is on the low end of what's usually considered a real novel these days".

Now, this is a much less spiffy online community than what NaNoWriMo has become (although give it a few more years and someone who does web design and I bet that'll change) as it does not have a word count validator or home page with videos, interviews, tips and other cool stuff.  So that means no daily posting to the site, no seeing my bar graph grow (which will be a little heart breaking for me cause I really loved that), and none of the other stuff that made the NaNoWriMo experience what it was.

No, this is the simpler online community consisting of nothing more than discussion forums, moral support, and people posting about their successes and failures over the course of the month.  As much as NaNo is an honor system because no one actually reads the 50k words to make sure you haven't written "word" 50,000 times this is a serious honor system as there's no one to validate your word count but you!  (Well, me and Microsoft word because i've been going off of that word counter this whole month.)

Another change is that I am actually allowed to edit this time around but only in so much as I don't edit myself out of 80,000 words by the end of the month.  And since every word I get rid of is one less towards that 80k goal I'm thinking editing is going to be pretty slim until I've gotten a hefty bundle of words added on.  Besides, the point is to finish the story, not to edit it to a publishable point.  (There's NaNoEdMo for that!  At least I think there is...)

Now, part of me thinks that I must just be a hard-core masochist for signing up for this.  After all, that 50k was by no means easy- there were days where getting those words out was just about as comfortable as visiting the dentist.  (Ouch!)  Plus, it is Christmas time and lords knows there's more than enough to keep me occupied with that this month.

But the other part of me just keeps saying "But the story's not done!!!  You have to finish!!"  And it points out that, in addition to the tortuous days, there were the good days.  The days when I actually felt ever the tiniest bit like a real writer.  The days when I finally got that scene out and it was actually sort-of funny.  The days where I had that idea and it wasn't half bad.  And the days where I choked through that 1,000 words, hated it, and then felt proud of myself for sticking to it anyway.

Because that's the main thing that I've always failed to do: stick to it.  Back in school, no matter what class it was for, I couldn't choke out those words.  Granted at that point I was supposed to not only choke them out but also share them with the class which was undoubtedly why I failed so epically, but still.  Yes, I take solace in the fact that no one's going to be reading this 80k words until I let them and that will definitely help me leave them on the page in spite of hating them.  But even with that, just writing is a pretty big challenge for me.

So I'm challenging myself to hit 80,000 by the end of the year.  It will undoubtedly be difficult even though it's significantly less than what I had to hit this month.  And I'm sure I'll want to give up and trash the whole thing at least a half a dozen times.  And I'm sure that some days I'll be thinking that I could have just stopped at 50k and worried about actually finishing the thing some other time.  A time when I'm less stressed, more sane, and more able to just write.  But waiting for that time to come would be akin to planning to pay my bills by winning the lottery: it's just not a safe bet.

If you are following me in this I'm not going to make any grand promises about twitter updates (what'd I get this month?  Like, five?) or daily posts or anything like that.  (Although I may end up just posting my daily word count to keep myself accountable since I don't have another website on which to do it.)  And I'm not going to claim that there will be a story on here unrelated to this writing challenge since there wasn't for the whole month of November.  All I'm going to do is tell you that I am still writing, and still getting Factin into trouble.

Email ThisBlogThis!Share to TwitterShare to FacebookShare to Pinterest
Labels: NaNoFiMo2009