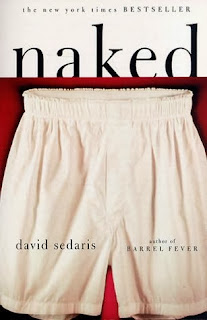 This book has been sitting on my shelf for so long that I can’t recall its origins.  I assume I picked it up in a used book store when I was killing time some Saturday afternoon.  It inevitably would have attracted me with its vaguely artistic-looking cover with plain white boxer shorts laid over a dark red background and the simple letters spelling out a word at once suggestive and mysterious: Naked.  And the ever-touted "New York Times Bestseller" stamped across the top would have helped me decide that David Sedaris (a name I’d heard of but new nothing about) was definitely the sort-of person who should be on my bookshelf.

And on my bookshelf he was- for years.  Sitting there amongst Dave Barry and Hunter S. Thompson- between comedy and surreal journalism- it did little other than make my shelf sag.  I decided it was high-time I do something to change that in September.  It is now December and the reason it took me so absurdly long to finish the damned thing is the main crux of my review: I couldn’t get into it.

Let me first acknowledge that David Sedaris is as great of a writer as you’ve heard he is.  He is a master of description and painted some of the most vibrant characters I’ve ever seen in literature.  From the way that certain people pronounce words of choice to the color and texture of their skin Sedaris paints a canvas that is both vibrant and vividly real- reminding you of people you’re sure you’ve met before and will meet in your travels throughout life.  The bulk of the highlighted passages (because I obsessively highlight the passages I really like) in my copy are physical descriptions or lines of dialogue that have the tell-tale signs of real life in every word.  And the way that people speak- for example: “She spat the word out of her mouth as if it were a worm she had discovered nesting beneath her tongue.”  Brilliant, right?

And there’s no lack of complex emotions in these characters, either.  Their prejudices, their loves, their obsessive habits and tendencies are all painfully real.  Especially the stories of Sedaris' family- the complicated politics of a family's identity have never been so clearly displayed.  I spent much of the book thinking that if someone were to ask me to describe an event in my life- even one that was hugely significant in my timeline- I couldn’t possibility do it with this much detail.

Every now and again he comes right out with his conclusions about people and the world we live in and they can pretty profound.  The fact that "everything we buy has been poked or packaged by some unfortunate nitwit with a hairnet and a wad of cotton stuffed into his ears." or the truth that "people aren't as foolish as much as they are kind".  So yeah, Sedaris is an amazing writer.

But an amazing writer does not a fantastic book make.  And that brings me back to my first point: I could not get into this book.  Perhaps it’s because of the varied nature of the essays- they hopscotch around his life, stopping at points throughout childhood and adulthood the way a kid with ADD might tell a story.  Some are poignant and display rich emotions and character-enriching events while others are seemingly meaningless and leave you wondering exactly what the point was.

And the way they are lined up is sometimes jarring.  An essay on the death of Sedaris’ mother- which is by far the most emotionally telling and memorable of the book- is found directly before an essay about an inconsequential visit to a nudist colony (the book’s title piece).  The one essay made me feel terribly vulnerable while the next left me wondering why I’d read it at all.  Not a fun experience for me as a reader.

Perhaps that is why I found myself finishing en essay and wanting to put the book down and move on to something that would reliably produce the desired response- like eating a sandwich so as to no longer be hungry or taking the dog for a walk so that he could relieve himself.  Productive activities that led to a small but important sense of accomplishment which this book constantly failed to deliver.  Honestly, the only thing that kept me coming back to it was my sheer stubborn desire to finish the thing and not return it to my shelf in half-read defeat.

So in the end I am left with a grudging respect for Sedaris.  This kind of irreverent humor in memoir most certainly has a place in the world and I have no doubt that Sedaris deserves all the praise he has garnered over the years.  And there are certainly people who would undoubtedly love this kind-of book.  I’m just not sure I can call myself one of them.
Posted by Bevimus at Sunday, December 08, 2013