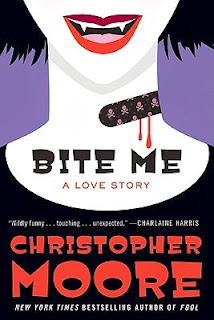 If you haven't read the first two books- Bloodsucking Fiends and You Suck- then you're missing out.  Not because you'd be that out of your depth if you just happened to pick this up as one of our MCs fills you in the bulk of the fun from the last two books (complete with a re-cap quiz) in the first chapter.  No, you' be missing out because the first two are just as good as this one and you'd be robbing yourself if you skipped them.

I've spoken before about my deep love of Christopher Moore.  I don't know anyone funnier than him in literature. This book, and subsequently the end of this story line, has assured him permanent residence in my heart.

It isn't just the humor- though I agree with the critic who called this a laugh-a-page book.  And isn't just the vaguely Whedon-esque way that he exposes us to the new villains and developments within his world, though again, you wouldn't be wrong for making that comparison.  No, it's the heart.  Christopher Moore's characters have just as much heart as they do hilarity and you can't help but fall madly in love with them with each new utterance, actions and conflict.

He's called the last two installments of this trilogy "A Love Story" because at heart, that's what the story is about.  Our young lovers Tommy, a writer, and Jody, a newly made vampire are in love.  And as great love stories go theirs is filled with just as much conflict, depth of feeling and intimacy as one could hope for.  I won't spoil the ending for you but suffice it to say that their love story felt very real in the end, even in the face of a city over-run with vampire cats and sword-wielding samurai.  And, it ended with both of the characters being true to themselves- and how many great love stories can say that?

Though Tommy and Jody are far from the most colorful characters in the book.  Everyone of them- even the Animals who only tend to get screen time as a group- are entertaining to the last.  Abby Normal, who serves as the primary narrator for our final story, is one of the most funny I've read and her vocabulary is absolutely unforgettable.  (For example: “Oh my God, you’re like Obnoxious and Annoying had an ass baby!”)  I'll never forget her.

Technically, Moore uses enough alliteration and poetic phrases to keep me respecting him while still keeping the narrative chock-full of silliness and laughs.  This novel isn't going to be winning any literary prizes, but that doesn't mean you can't love it.  And Moore shows his deep respect for words and they way they can define a person in the overall arch of one our MCs.  "I need the words, Jody.  It's who I am."  You'll have to read the whole story to find out what that means, exactly- and I highly suggest you do.

Because in the end, this was one of my favorite story arcs.  I would highly recommend it to anyone who loves Whedon, Vampires, San Fransisco or turkey-bowling.  Or, you know, anyone who really like a funny book.