Celebrate the Small Things- The End of March 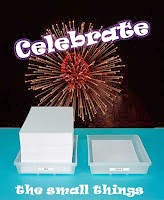 Thanks to Viklit for hosting us!
This week I'm celebrating...

Finally started writing up my A to Z posts!  I know some of you uber-organized folks have already finished writing every danged one of your 26 posts and have them scheduled to go live.  Well, I'm not that organized, so there!  *sticks tongue out in as childish a manor as possible*  Seriously though, it feels good to have started the process and if I can manage to stay at least a week ahead in scheduling then I should still be able to visit as many folks as possible (which we all know is the primary purpose, anyway).

House of Cards  After going absolutely nuts over this amazing show last year we moved on to several other fantastic series and sort-of forgot a lot of the details of season one.  When season two premiered back in February we were neck-deep in one of those other series and therefore unable to watch it.  Well, we finally switched back to House of Cards, rewatched the first season and then moved onto to season two.  That season two opener was just freakin' amazing.  There's a moment about 3/4 of the way through the ep that is so shocking it left both of us with mouths agape for several minutes as we alternated between "I can't believe that just happened!" and other exclamations.  There's just nothing that can compare with Kevin Spacey at his most evil.  So epic!

Well, I'm back to working on my A to Z posts.  Here's hoping you all have a fantastic end of March.  See you all on Tuesday!