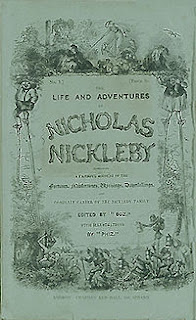 Well, it took me a full 30 days rather than the given 28, but I finally finished Nicholas Nickleby.  I have to say that I’m proud of myself, even with the extra time it took.  This was NOT an easy read.  And I’ve been thinking that it isn’t necessarily Dickens, but more just the style writing of the time.  I say this because many of the things that made this such a laborious process were the same things that made getting through Pride and Prejudice so difficult last year: the stylistic trademarks of the literature itself, rather than the voice of the author.


Sure, Dickens has a penchant for what I would qualify as run-on sentences.  A large number of those contained in the book average at a paragraph in length with more commas and semicolons than my mind could take in easily.  I found myself having to re-read several parts as my brain tripped over the wording and tried to make sense of the syntax which was so unfamiliar to me.  Not to mention that this book, like Pride and Prejudice, is now riddled with highlighted words and written-in definitions that came from stopping to look up something in the dictionary every few pages.  I have to admit, a lot of them seemed like pretty useful vocabulary and I’d be proud if I could absorb them all into my rather limited word bank.  But there were, of course, some that described things that one wouldn’t find outside of nineteenth century London and therefore were interesting only for historical purposes.  But again, that’s the style of the time and it’s impossible to look at this book separate from the period it took place in.


It’s also impossible to look at this book separate from the author who wrote it.  I’m sure that many might view that as a shortcoming, but it’s how Dickens made his career and earned his spot in the poet’s corner of Westminster Abbey.  Dickens is famous for his depictions of London lifestyle: the inhumane school systems, the corrupted legal system, the horror of the debtor’s prisons and the immoral treatment of all those who can’t buy their place in high society.  And his voice not only criticized but inspired enough public outrage over these systems as to actually bring about some change.  This is very clear in this volume where he takes aim at the Yorkshire school systems which he depicts with more clarity and reality than any of the characters.  People were so appalled by the depiction of Dotheboys Hall that many of the Yorkshire schools were shut down due to disgraced parents pulling their neglected children out of them.


Another setting which seems very real and fleshed out is the theatrical one in which the troupe of actors live.  The actors themselves make up their world with their costumes, speeches and posing.  And the tricks and tools they use to get funding, find new locales to play in, entice an audience and create their dramas seems like vivid recollections rather than creations (because they were).


But the bulk of the action takes place in London itself and Dickens fleshes out each street, neighborhood and district with the sights, smells, sounds, actions and characteristics from his own experience.  And the country side which he found so comforting comes out just as beautifully as they must have looked to him.  Every book of his that I’ve read has excelled in this way and again, I think that’s what made him so well-liked.  People would read his stories and know exactly where they were and what he was describing.  And his depictions of the small homes in which our heroes stay are so comforting one could wrap themselves up in them like a blanket.


Perhaps it is because his settings are so intensely real that his characters are critiqued so disparagingly.  A brief disclaimer here: Nicholas Nickleby is one of Dickens’s early works and comes from his light period- his career having been separated into two parts of light (earlier works) and dark (later works).  Every other book of his that I’ve read comes from his later era and has a decidedly darker tone.  In Nickleby, while there’s a lot of dark stuff that happens plot-wise, the bulk of the scenes are comedic and therefore the characters are meant to be humorous.  All of the actors, some of the family members, the high and low society peoples and even some of the villains look funny, do funny things and behave in funny ways.


I don’t know if it is because of this that so many of them are so one-dimensional, but that’s what they are.  They’re characters, images, stereotypes rather than real people and while they earn laughs they rarely show anything beyond the surface.  Even the main characters are pretty shallow and seem to be either plot devices (as is the case with the Cheeryble brothers or, as I call them, the two Santas) or blank slates upon which a moral structure is built.  The woman, especially, are terribly shallow and seem more like caricatures serving the satire or personifications in a morality play rather than real characters with thoughts, wants, or shortcomings.


The only character with any real depth is the primary antagonist who is more introspective, questions his own motives more and has a larger arc than any other character.  Ralph Nickleby is both the most evil and my favorite character in the entire book.  And several others who seemed promising in the beginning end up being big disappointments.


This was a harsh reality for me because after Great Expectations where the woman are just as conniving, scheming and struggling with their deficiencies as the men are I had hoped to see a similarly rich development here.  Especially since, unlike Great Expectations, Nickleby is told from the third person narrative so there’s a lot more room for observations,  judgments and questions.  While Dickens takes full advantage of that when talking about the characteristics of London lifestyle he drops it completely when talking about the woman here.  All this to say that when I make my next selection of Dickens it will certainly be from his darker era because it seems like that’s the place to find real character development.


Last but certainly not least, the plot.  Nicholas Nickleby is, at its most basic form, a love story.  There’s a double marriage at the end with a third close on its tail and all the heroes, for the most part, do live happily ever after.  There's also a lot of filial love and the love one feels in friendship which (in my opinion) hits home a lot more than straight-forward romance.  And it's is worth note, that another main character who is tragic at both the start and finish is mentioned in the very end: the very last scene has the children from these marriages playing on the grave of the poor, mistreated Smike.  It's a last reminder of the harsh reality of Dotheboys hall and of the wreakage left by our main protagonist's life and it was very gratifying.

But the interesting, meaty stuff is the many sub plots that proliferate the entire tome- the schemes, the downfalls of villains, the comeuppances of people who earn their new stations.  Dickens often juxtaposes these by splitting scenes, trying to introduce humor when things seem bleak and reality when things seems too hopeful.  And he often has different characters overlapping each other on the timeline and will remind you at the end of one scene that you only what these characters did, so he'll take you back to see what the other were doing.  It keeps you on your toes and breaks up the narractive in a way that I rarely see.

And of course, most of these both originate and end with Ralph Nickleby (thus why he has so much room to gain dimensions and why he's my favorite).  But the big problem with that, of course, is that the main character goes through all of this right along with him and ends up looking just as shallow at the end as he did in the beginning.  There’s a sense of having just witnessed a bad actor do a part that might have been much better liked with someone superior portraying him.

None of this is to say, strangely enough, that I didn’t like the book.  In the end, I would have to say I did.  While it doesn’t hold a candle to any of his other works I’ve read it is endearing in its lightheartedness, I like a lot of the ideas espoused in the pages, the sub plots are interesting enough that I’ll remember them and Ralph Nickleby is a good enough villain that he will be added to my list of great Dickens characters, right along with Miss Havisham- a woman!  And most of all, Dickens plays around enough stylistically that it serves as a good example of how to broaden traditional third person narrative so my appreciation for him as an author is not at all deteriorated from having read this.


In the end I’m glad that I read this, but I wouldn’t recommend it to everyone.  If you’re a hard-core Dickens fan, it’s a must read.  If you’re a Dickens hater, skip it because this will probably just give you more ammunition to fire.  And if you’re a Dickens virgin, start with something from his later works because that will open up the door a lot wider than this could.
Posted by Bevimus at Saturday, March 02, 2013