So, having just regained power after a mere 24 hours without and having that be the worst thing we encountered in this storm that destroyed people's homes, flooded people's cars and took people's lives I have to begin this post by stating the obvious: I am really fucking lucky.  I'm lucky I'm alive.  I'm lucky my home was unscathed, especially since my in-laws had a tree fall on theirs.  I'm lucky we had no flooding when others watched their cars float down the street.  And I'm really amazingly lucky that this trip wasn't ruined a second year in a row.  I feel stupid focusing on that in the midst of so many bigger issues, but as I said, I'm really lucky.  So I'm going to talk about my wonderful Sleepy Hollow trip, cause that's the big news in my world.

Of the four events I had planned, we made it to three of them.  I'm going to skip the story of why we didn't make it to one of them and focus on what we did make it to, because they far overshadow that one miss. 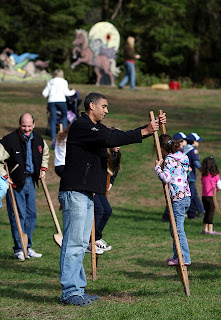 Legend Celebration at Washington Irving's Sunnyside
I've been to Sunnyside before and I remember it, so that certainly wasn't the highlight of the day.  But I can't recall being to it during an event with lots of entertainment, Halloween goodies and freakishly adorable little kids in costume.  Those are the highlights.  Seeing an actor incorporate the passing train into his story of King Arthur and Sir Gawain's defeat of the Green Knight.  Hearing the balladeer play the chords from stairway to heaven during the performance of The Devil and Tom Walker.  Seeing little kids dressed up as candy corn and the Marvel superheroes- I saw Captain America pushing the Incredible Hulk around in a stroller!  Those were the highlights.  And how lucky were we to enjoy all of this rain-free the weekend before a hurricane?  It was a great day. 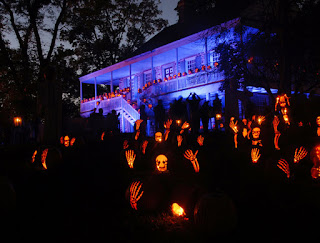 The Great Pumpkin Blaze
This event was definitely the best part of the weekend.  They advertise it as consisting of "over 5,000 hand-carved pumpkins" which sounds impressive, of course.  But to see it?  That's overwhelming on a level I was not prepared for.  Pumpkins as far as the eye can see arraigned in more elaborate ways than I thought physically possible.  Pumpkins covering the entirety of a tall tree- each one hand carved and lit up.  An entire graveyard with tombstones made out of the tallest pumpkins I've ever seen and skeleton hands reaching out from those graves.  Giant dinosaurs made entirely out of pumpkins- T-rex, Stegosaurus, Triceratops!  Not quite life-sized but not much smaller.  A zoo complete with giraffes, gorillas, elephants and a hundred monkeys.  Big Ben with a moving clock face and working pependulum.  A seascape with all the fish, crustaceans, coral and other sea creatures you could think of.  A giant bee hive with hundreds of bees.  Giant jack-in-the-boxes made entirely of pumpkins carved with intricate geometric designs.  Celtic knots out the wazoo, an entire house made of jack-o-lanterns- I can't even remember everything we saw!  Even now I find it overwhelming to try to recount everything- it was that insane!  And so, so awesome. 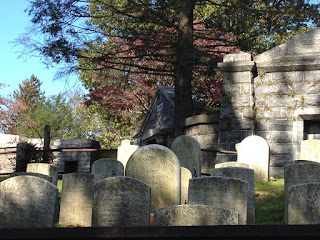 Sleep Hollow Cemetery
﻿No visit to Sleepy Hollow would be complete without a visit to the cemetery, the Old Dutch Church and the man who made the legend centered there.  Seeing Washington Irving's grave first hand seemed like an appropriate way to pay homage.  And seeing the rest of the cemetery was just cool for historical purposes.  Our walking tour was not a spooky one so there were no ghost stories.  But there was a whole lot of information about how cemeteries worked before the dawn of the industrial revolution, why certain symbols appear on grave markers, what a foot stone is, which stone wears best over time (it's not marble, fyi), how Andrew Carnegie designed his company and why William Rockefeller's estate is missing a mansion.  My inner history buff was loving the info and my inner child was just giddy from walking around in the gorgeous fall landscape complete with a cool wind blowing brightly colored leaves around spooky tombstones.  And again, how lucky were we to see all of this rain-free the day the hurricane was scheduled to hit the shore?

It didn't start raining until we were less than an hour from home so we made it with no issues and we were tucked safely inside by the time the storm started in ernest.  And on Monday when our power went out our biggest problem was boredom after we finished the fifth board game- rather than a flooded basement or a tree falling on us.  And now that Sandy has past I'm still marveling at how incredibly lucky I am to have made out so incredibly well this weekend.  And I am truly grateful.
Posted by Bevimus at Tuesday, October 30, 2012