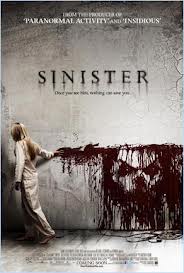 It’s hard to get a really good feel for exactly what this movie is about from the previews.  There are videos of rather disturbing things that are freaking Ethan Hawke out.  There’s some kind-of demon who may or may not live in the images depicting it.  There’s a little girl who sees… dead children?  And there’s a seemingly possessed child unfolding itself backwards out of a cardboard box while screaming.  Just pictures, moments and little snippets of information that don’t form any kind of story line.  This is the first step in making a great horror movie.  (Because one of the worst feelings is getting to the end of a movie and realizing that all the scary moments were in the trailer.)

The second step is mystery and Sinister starts out with a lot of that.  The very first thing you see is some old Super 8 footage of a family being murdered.  It’s disturbing enough to make you wonder what exactly happened.  Enter the main character Ellison Oswalt (Hawke) who gives my alma mater a bad name by showing up in a Bennington College t-shirt and acting like a dick.  He’s just moved his family- largely against their will- to this new house in suburban Pennsylvania so that he can write his new book.  He’s investigating the film we saw in the very beginning.  Apparently there’s a missing child in addition to the murdered family.  And no sooner does he console his wife that they’re not living a few doors down from the crime scene (“like last time”) than we see him look out the window to the backyard at the exact location from the video.

What this video was is quickly explained as no sooner does he go up to the attic to put a box away but finds another one containing a projector and reels of Super 8 film like the video we saw- seemingly home movies with harmless labels like “Pool Party ‘66” and “BBQ ’79”.  Being an investigative writer, he sets right off to find out what these movies are all about.  The first one he watches is that film from the beginning of the movie with a family being murdered.

As he continues to watch these films (which get more and more disturbing), strange things start happening around the house.  His son who suffers from night terrors has some pretty unsettling nocturnal behaviors.  There are strange and dangerous creatures showing up.  The projector keeps turning on by itself.  True to typical horror movie style he ignores these things and moves himself- and his family- further into harm’s way.

The actual plot becomes clear by about the half way mark and even though you sort-of see the ending coming it’s still deeply, deeply satisfying.  I left the theater feeling confident that although the movie scared the piss out of me I would sleep perfectly well since usually the only things that really get me are zombies and there are none in this film.  I knew it was a good movie when I woke up at 5:30am and had to turn on the light to look around the room and make sure I was alone.  I didn’t get back to sleep that morning.

In the reviews I’ve read, many people complain that the majority of the scares are “cheap” in that they’re those classic horror movie false scares where something jumps out at you but ends up being nothing.  I’m fine with those since they usually elicit short, excited screams and jumps from me.  But by about the halfway mark, the cheap screams are replaced with distrubed gasps as the terrible truth becomes clear and the movie answers all of the questions that its main character asked when he started investigating.  In the end, you’re left with the feeling that this is the kind of thing that urban legends are based on, and possibly much older legends originally reported.

I have almost nothing bad to say about this film.  It worked for me on just about every level, even without the zombies.  And my boyfriend got a great movie-going experience since I screamed and flailed at every scare.  I’ve commented before on how I’m the best person to see a horror movie with.  Suffice it to say I still am.

The only thing that’s annoying is what is annoying about all horror movies- that scary, unsettling things happen and the main character ignores them, rationalizes them, excuses them until it’s too late.  But the writers of this film even address that since they create a real enough character that you can kind-of understand what would drive him to keep himself and his family in this situation that is so clearly wrong.  There’s a couple of moments where you actually feel bad for the guy cause it seems clear that he really is at the end of his rope and truly can’t help himself.

That being said, the ending is still delicious.  And if I ever move into a house and find a box of family home movies on Super 8 film in the attic I’m converting and moving into a monastery.