The History Of Moo Duk Kwan: A Non-Review 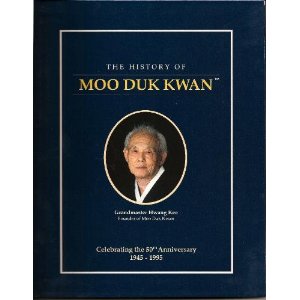 Quick note to the reader: I can’t do a regular book review of this book.  The translation (from Korean) prevents the flow of words that might pull someone in, the format is one of a scrap book of sorts filled with pictures and artifacts and the book is far too short to be critiqued the way you would a “real book”.  So I’m not going to.  I’m going to write about what I learned from it: my take on the history of Moo Duk Kwan.

Ah, hem.  The history of martial arts- any martial art, not just the one I study- is inevitably riddled with inconsistencies, contrary statements, gaps in the time line and more confusing answers than clarification.  Even when the timeline is relatively short (60 plus years for Tang Soo Do), it’s still difficult to get a clear idea of where it all started.

The reason for this is that the earliest form of martial arts (some variation of wrestling) can be found in just about every ancient culture known to man.  It pops up in historical records in Asia, Europe and the Middle East in various forms and then splits off into different styles that all claim to have originated in one specific locale.  Some people argue that all off these different forms originated separately and independently of each other while others state that the roots of modernly studied forms can be traced back to just a few cultures.  Trying to create a coherent timeline becomes virtually impossible to do without studying the entire history of the culture because of so many wars, military occupations and what I call knowledge hoarding.

Knowledge hoarding, for the purposes of this post, is the secretive way in which many individuals obtain a wealth of knowledge on a particular subject and then hide it away from the rest of the world to prevent anyone else from learning it.  This is something that human beings have done for as long as they’ve had the brain capacity to learn; but it’s especially prevalent in the history of martial arts.

In a practical way, this is totally understandable.  After all, I don’t want to teach you how to kill me.  But it makes studying the origins of any one form of martial arts really hard to do because it’s difficult if not impossible to access the information you need.

This same tradition is the exact thing that made Hwang Kee’s education in martial arts so difficult for him.  He first observed someone fighting a group of men, totally outnumbered, using an open hand style of combat that he’d never seen before when he was seven years old.  He asked the man to teach him how to do this and the man said, predictably, “no”.   Hwang Kee, being a crafty little seven year old, went to this man’s house and basically spied on him and mimicked what he saw.  No formal training, no “Here’s how you do it”.  I can’t think of a better story to illustrate the point.

Then, you have the wars and military occupations which prevented the development and spread of many a great idea, martial arts being just one of them.  Korea was occupied by Japan from 1910 to 19 45 and during that time “all dimensions of Korean traditional cultural expression were prohibited”.  So even though there was an existing martial arts tradition- “Soo Bahk”- no one was allowed to study it.  (And now you’re all saying “Oh!  So that’s why Tang Soo Do was founded in 1945!”, right?)

So little Hwang Kee, having observed but not been taught by this mysterious man, went on to do very well in school and begin work for the rail road company in Manchuria.  He was not exposed to martial arts again until he was 22 when he met a Chinese Master by the name of Kuk Jin Yang.  He met him through a friend at the railway, asked him to teach him and was promptly refused.  Yang’s excuse?  “I am not good enough to teach you.”  Hwang Kee visited him twice more, asked twice more, and was finally granted his request.

So, yay!  Finally at the age 22 our young founder is able to begin formal study… for all of a year before he had to return to Seoul.  So much for that.  Seoul, of course, is still occupied by the Japanese so there’s no formal study available to him.  But, he was able to find some books on Okinawan karate tucked away in the library of the Cho Sun Railway Bureau where he worked.  He studied these obsessively, practicing the moves described as best he could along with what he had learned from Master Yang.

As soon as Korea became an independent country he started his own school, formally teaching others what he had learned through his limited studies.  In the beginning, it was very, very difficult for his style to get its footing. Because of the Japanese occupation, no one had any idea of Soo Bahk or the Chinese martial arts and the name he used, “Hwa Soo Do” (translated as ‘art of the flower hand’) was nothing anyone had ever heard of.  His first group of students quit after three months.  He tried again.  His new group of students quit, again after about three months.

Feeling frustrated, Hwang Kee went downtown and met two karate masters who had formally studied in Japan- Sang Sup Chun and Won Kuk Lee.  They had both founded gyms there in Korea teaching Kong Soo Do and Tang Soo Do, respectively.  Both of these masters were experiencing growth in their schools because of the Japanese influence of their technique (even though the names are Chinese).  Being a practical man, Hwang Kee adopted the name Tang Soo Do for his teachings.  Within a few months his school was growing.

So again, yay!  He’s finally formally practicing karate… until the Korean war starts in 1950.  (Noticing the theme?)  He and his gym all moved south to seek safety from the north.  When the war ended, he was able to move back to Seoul, but had to practice in a gym without a proper floor because after all the destruction there wasn’t much prime real estate available.  But he and his students made do and the gym soon experienced growth again.

1953 to 1961 marked the most active and successful period in history for Mood Duk Kwan.  Hwang Kee published many books of his teaching as well as a monthly Moo Duk Kwan newsletter.  The art was widely recognized by the public and began to be taught in military bases of the US army.  And in 1961 the team was invited to the Goodwill Martial Arts Championship- the very first international competition featuring martial arts from Korea, China and Japan.  It earned Moo Duk Kwan international recognition.

Also, in 1957, Hwang Kee discovered the Moo Yei Do Bo Tong Ji- a book on Soo Bahk published 300 years earlier.  It is the only martial arts book from that era still available today.  Hwang Kee went through it at a microscopic level and incorporated its teachings into Moo Duk Kwan, attempting to bridge the gap of time and make Moo Duk Kwan into the traditional Korean Martial Art.

All was well until May 16, 1961 when a military government was installed as a result of the April Revolution.  Lt. General Chong Hee Park took control of the government.  They immediately forced the gym to stop their monthly publications.  They fired the people instructing Moo Duk Kwan in the military bases “with no reason”.  They were prohibited from attending any international events.

But perhaps most notable in this period of political unrest is the split between Tang Soo Do and Tae Kwon Do.  In 1964, the Tae Kwon Do group attempted to unify all Korean martial arts into one organization.  Tae Kwon Do had won favor in the Korean military during the Korean war and gained popularity when it was taught in the Korean military bases.  Supported by the government, pressure was placed on Moo Duk Kwan to join this system and Hwang Kee considered it because of this political pressure.  He ultimately refused for three reasons: 1) the fact that the official name would be Tae Kwon Do and he felt that they would lose the history of Soo Bahk, 2) they would be granted only 3 of 21 seats on the board of directors and 3) Moo Duk Kwan had previously been the leader in international activities/competitions.  (This is one of those historical stories that you can't but suspect would be told very differently from the other side...)

Hwang Kee’s refusal to join marked a huge shift in the popularity of the art.  Before this time, Moo Duk Kwan was practiced by over 70% of martial arts practitioners in Korea.  After this time, Tae Kwon Do replaced it as the most widely practiced martial art in Korea and, eventually, the world.  Many people split off from Mood Duk Kwan in order to practice Tae Kwon Do, eventually forming their own school.  It became an Olympic event in 2000.  In a nut shell, it’s why I had never heard of Tang Soo Do before I started practicing it in 2006.

But back to history: Tae Kwon Do was so highly favored by the government that in 1965, the school received a countermand ordering the dissolution of the Korean Soo Bahk Do Association.  Hwang Kee started legal proceedings against the Korean government in order to protect the school.  He won the lawsuit.  The government took it to the supreme court.  In 1966, he won again and forever secured the organization’s existence.

Since then, despite continuing political unrest, the art has continued to spread.  There are federation instructors in Malaysia, Australia, Germany, Switzerland, Belgium, Greece, Italy, the UK and the USA.  There are unofficial gyms (i.e. lead by instructors not officially ‘in the club’) all over the world.

Hwang Kee died in 2002 and his son took over the organization.  They are still training instructors, still competing internationally, and still hoarding knowledge, as evidence by the introduction of the book.  The art itself has roots in Japanese, Chinese, and strangely enough, Korean martial arts.  I feel overwhelmed by the complexities of its history, and it’s only 67 years old.

So perhaps it’s fitting that after having read this book I have only more questions, only more research to do, only more wonder about the connections between this art and the more ancient ones it’s based on.  After all, the purpose of practicing the art is to learn, not to know.  I’ve got a lot of learning to do.
Posted by Bevimus at Wednesday, January 30, 2013