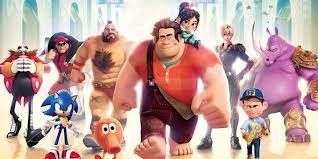 I think it's safe to say that I was destined to love Wreck-it Ralph before I ever saw it.  I grew up in the dawn of the magic that is the in-home gaming system, right on the cusp between arcades and the new consoles which would become a staple in most people's homes.  My brother and I spent our childhoods blowing my poor mother's hard-earned cash in both arcades and at home where we devoutly worshiped our NES.  Additionally, I've been known to absolutely love animated movies that are deliberately made to be adorable.  Put those two things together and you've got Wreck-it Ralph, a movie which has absolutely stolen my heart.

They grab you in the very beginning by throwing just about every single gaming reference they can possibly think of at you.  In one of the first scenes we see Bowser, Dr. Eggman, and the ghost from Pac-man leading Ralph to try to come to terms with his villain self in what must be the most endearing support group yet.  Then Ralph passes Q*bert on his way to Tapper's where we see the paperboy from Paperboy, most of the fighters from Street Fighter, Frogger- hell, even the paddles and ball from Pong are there.  The first fifteen minutes of the movie had me excitedly squeaking every few seconds as another reference was made.  And when the primary antagonist shows his true colors for the first time he uses the Konami cheat code, which made me absurdly happy.  They span the world of gaming by having main characters from an old-school or "retro" arcade game, a racing game and a first-person shooter and they capture the worlds, the graphics and the typical canon of those games really well.

But as with all of these movies, the characters are what makes Wreck-it Ralph the masterpiece that it is.  First we have Ralph who reminds me, and I imagine most people out there, of their dad or their uncle.  He has the personality of a truck driver or a construction worker (or in his case, a demolition crew leader)- he's a bit gruff on the outside but on the inside he's a big 'ol teddy bear.  John C. Reily was the perfect choice for him and fleshes him out beautifully.  Then there's Felix who is perfectly voiced by Jack McBrayer from 30 Rock and has all the innocent quirks that made us fall in love with Kenneth the page.  Then we have Calhoun from the fast paced first-person shooter which Jane Lynch brings home with the quips and sarcastic remarks she's so famous for.  And of course Sarah Silverman who was way more adorable than she is when doing her characteristic comedy as Venellope.  And, the interactions between her and Ralph are so endearing that you can't help but fall in love with the both of them. 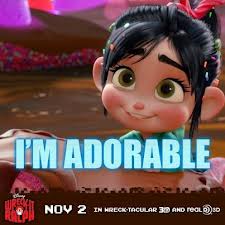 And last but certainly not least is King Candy, the main antagonist who we later find out was the one who embedded the whole arcade with the fear that we see in so many interactions.  He's voiced by Alan Tudyk who I already worshipped from Firefly and came to see as ranged from Dollhouse.  He's got a very Alpha-esque vibe here as he starts out flighty and becomes one of the most devious villains around.  He's so devious he's able to convince Ralph that the biggest betrayal he's ever done is in the best interest of the person he's trying to protect. 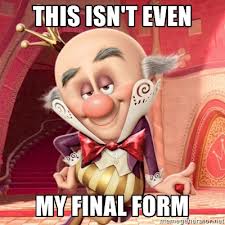 I sense a boss battle coming...

The plot, needless to say, is spot on and has all the conflict, drama, humor and redemption we would expect from such a movie and the last scene is so heartwarming it made me cry.  That's right- I said it!  I cried at a kid's movie and I'm not afraid to admit it.  I would argue that if you don't have some kind-of serious warm and fuzzy feeling at the end of that movie then you must be dead inside.

I can't say that Venellope took the place of Agnes and Boo in my heart or that Ralph replaced Gru as the best villain-turned dad ever.  But I can say that I haven't loved a movie this much (or cried this much at the end of such a movie) since Despicable Me.  And given my unending adoration of said story that's saying a hell of a lot.
Posted by Bevimus at Sunday, December 02, 2012